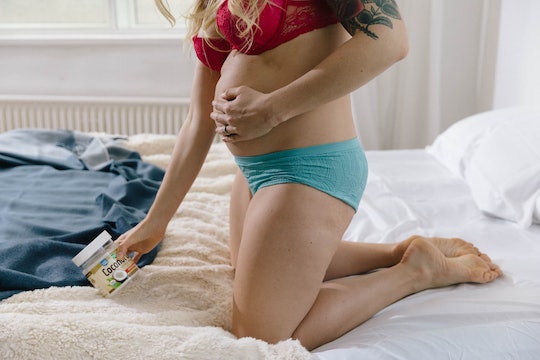 These days, coconut oil is used for just about everything, from food to haircare and skincare — and it's even having a moment as lube. But what about when you're expecting? Can you use coconut oil as lube while pregnant? According to Parents, oily lubricants may come with some unpleasant side effects, so here's what you should know about this trendy tropical emollient when it comes to pregnancy.

"Coconut oil is probably safe, but it can affect vaginal pH and for certain women, this can increase the rate of vaginal infections," explains OB-GYN Dr. John Thoppil in an email interview with Romper. According to Healthine, pH is essentially a measure of how acidic or basic the vaginal environment is. On a sunny vagina day, a balanced, slightly acidic environment prevents yeast and bacteria from growing, reported Healthline. However, when that environment is thrown off for whatever reason, infections can ensue, and absolutely no one needs that kind of problem during pregnancy.

According to Glamour, the very properties that make coconut oil magical as hair and skincare — for instance, its antifungal and antibacterial properties — are exactly the elements that can mess with your pH, especially if you're already prone to infections. In particular, yeast infections, while not particularly dangerous, are very common during pregnancy, reported American Pregnancy. They're also a huge pain in the butt. If you can avoid even one yeast infection by leaving coconut oil out of the sex equation, you should absolutely do it.

If you're reading this and you've already used coconut oil as a lubricant, don't freak out. As OB-GYN Sherry Ross, M.D., told Self, coconut oil causing infections is more a theoretical concern than anything else. The oil can throw your pH off, but Ross hasn't seen any cases in her practice. And according to Shape, there haven't been any scientific studies to determine the safety of coconut oil as a personal lubricant one way or another. Still, during pregnancy, when you want to protect that pH balance more than ever, you're probably better off talking with your OB-GYN about the tried-and-true lubes they already know to be safe. They might not be as natural as coconut oil, but they'll get the job done.

"In general we recommend water-based lubricants," says Thoppil. "I am a fan of Replens, which is a common non-estrogen lubricant we use in menopausal women." You can pick up Replens over-the-counter, or ask your doctor what they recommend.

Hopefully, though, you'll find that during pregnancy, you might not need lube as much as you did before. "Pregnancy increases both estrogen and progesterone levels quite a bit," says Thoppil. "For most women that means more vaginal secretions." He notes that some women who still feel dry might simply be progesterone dominant (progesterone is like the anti-estrogen, he explains). According to Parents, the rapid hormone fluctuations of pregnancy and even a decreased interest in sex can also contribute to vaginal dryness, which is nothing to worry about so long as you don't have any itching or burning along with it.

The internet has spoken: coconut oil is a wonderful thing. It tastes great, and, according to Allure, it's a kind of "beauty cure-all," with uses as a makeup remover, a breath freshener, and a facial moisturizer. As a pregnant lady, you can still use coconut oil for all of that — and more — but maybe leave off experimenting with coconut oil's potential in the bedroom for a less sensitive time. As always, be sure to ask your doctor if you're really troubled by vaginal dryness, or concerned about the safety of any personal lubricant.