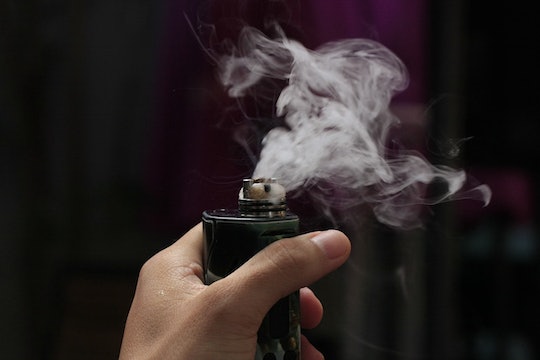 What do you do if you're expecting a baby, but haven't quit smoking? It took me years to finally kick the habit, but if you're pregnant, you don't have years. A tiny bead of life depends on the choices you make each day, and while that's a powerful motivator, pregnancy isn't magic — quitting remains an immensely difficult venture. This is a big reason why many moms turn to e-cigarettes, but can you use e-cigarettes during pregnancy? They're often touted as more healthful and seem worth a try. But what experts want you to know about using e-cigarettes during pregnancy is that, despite the sleeker packaging, you're still inhaling harmful tobacco and nicotine — both of which can have major negative effects on your pregnancy.

Adrienne Richardson, MD is a HealthPartners OB-GYN in St. Paul, Minnesota, and the medical director of the Healthy Beginnings program, which connects pregnant women using alcohol, cigarettes, or drugs with professionals who provide non-judgmental support throughout a woman's pregnancy. According to Richardson:

"Smoking is associated with numerous poor outcomes including sub-fertility, miscarriage, preterm birth, low birth weight, and stillbirth. At this time, there is no reason to think that e-cigarettes do not also carry these risks."

While there isn't a body of research on e-cigarette use during pregnancy, using them any time is still associated with respiratory disease, Richardson notes. In addition, vapor from e-cigarettes is particulate, so if you or your loved ones are exposed to it, that's harmful secondhand smoke. "Finally, if there are other children in the house, they are at risk of accidental nicotine overdose if they were to ingest the nicotine cartridge," Richardson explains.

E-cigarettes may seem less toxic than puffing on a Camel, and they are free of some chemicals, like carbon monoxide and tar, but don't be fooled. The tobacco and nicotine you inhale is still poisonous, and according to the Centers for Disease Control and Prevention (CDC), e-cigarettes include unregulated flavorings that may pose unknown risks to a fetus.

Being a smoker doesn't make you a bad pregnant person — or a bad mom. And you're not alone. One in 10 women smoke during pregnancy, according to Smoke Free Women, and quitting is absolutely the healthiest thing you can do for yourself and for your baby.

"Anecdotally, I do see patients who are using e-cigarettes during pregnancy," explains Richardson. "In my experience, these patients are using e-cigarettes in their attempts to quit or decrease smoking and they are doing their best to quit altogether." Richardson applauds any effort to cut back, but it's important to note that there's no evidence suggesting e-cigarettes will help you kick the habit. On the other hand, group, individual, and telephone counseling have been clinically proven to help.

Don't be afraid to ask your doctor about smoking cessation resources available in your area. It's not your doctor's job to judge you now. With any luck, they'll be so excited that you're committed to quitting at this crucial time of life, they'll do whatever they can to help you succeed.