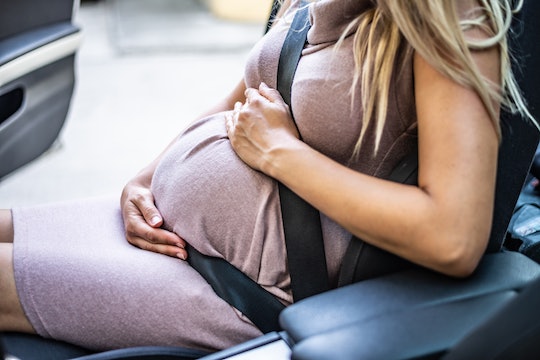 Getting comfortable during the long months of pregnancy is no easy feat. As the temperature begins to drop, it is oh-so-tempting to turn on your car seat warmer and settle in to get cozy. But is it safe? Can you use heated car seats while pregnant?

If you are pregnant, you've probably been told that hot baths and trips to the hot tub are no-gos. The Cleveland Clinic noted that this is because they can raise the core body temperature of a pregnant person, which can lead to heat stress, which poses a risk to the developing fetus. The American College of Obstetricians and Gynecologists (ACOG) have made similar declarations, and also warn against engaging in the use of saunas, steam rooms, and attending "hot yoga" classes. They noted in their review that this is especially true during the first trimester when "exposure to heat from sources like hot tubs, saunas, or fever has been associated with an increased risk of neural tube defects," like spina bifida and anencephaly. It sounds incredibly scary, so of course you're nervous about those amazing seat warmers.

But Kecia Gaither, MD, director of perinatal services at NYC Health and Hospitals/Lincoln in the Bronx, tells Romper that typically, "Heated car seats don’t get that hot — so issues from hyperthermia aren't a concern." She agrees with ACOG in that hot yogas and saunas are a far bigger concern.

Daniel Roshan, MD, director of ROSH Maternal-Fetal Medicine, tells Romper pretty simply, "A pregnant woman can use her car seat warmer as long as it does not increase her body temperature over 38 degrees Celsius, or 100.4 degrees F." It's the core temperature of the body that is a concern. He says that if a pregnant person would like to warm up via the toasty goodness that lives in the seat, that he "would recommend using the lowest mode or setting possible." So feel free to turn on that warmer, and get nice and comfy —just don't overdo it.

The relative safety of car seat warmers 11 years ago was probably not as clear cut as it is today. When I was pregnant, I can honestly say that the last thing I wanted to do was take a hot yoga class. (OK, to be fair, even when I am not pregnant, hot yoga is about as appealing as dental work and doing my taxes.) However, I was buying a car when I was pregnant with my first, and seat warmers seemed like something I had to have. When a salesman helping us made a comment about me being pregnant and using the seat warmers, I was taken aback. I had never dreamed they would be unsafe for a pregnant woman, but then again, I'd never been pregnant before. And even though we ultimately ended up in an SUV with no heated seats, the experience stuck with me all this time. Probably more because of the slightly inappropriate car salesman, and less to do with the heaters themselves.

But now I know: safe to use on the lowest setting. So take that, salesman. And high fives all around for small comforts when you're pregnant and freezing.