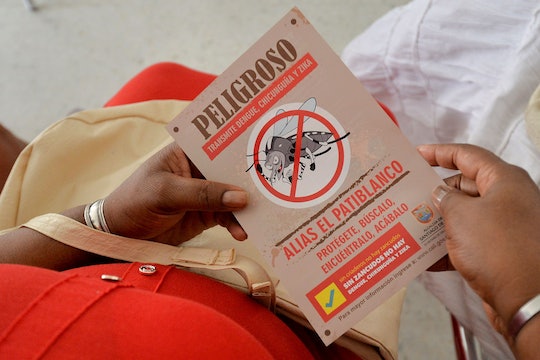 Can You Use Insect Repellent On Your Baby? Zika Virus Protection Is Necessary

The more the world learns about Zika, the scarier the virus becomes. And now that some experts are predicting a Zika outbreak in the United States as the weather warms up, it's time to start protecting yourself and your children from the Aedes mosquito. Bug spray is the easiest way to do this, but can you use insect repellent on your baby? It depends on the ingredients.

According to the EPA, although products containing oil of lemon eucalyptus should not be used on children under the age of 3, DEET can be used on children with no age restrictions. The FDA and the American Academy of Pediatrics disagree slightly, recommending that parents avoid using DEET on babies under two months old. Everyone seems in agreement that it's safe after that. Still, that doesn't mean you should be giving your kids DEET-based baths. The EPA recommends washing off your children's sprayed skin and clothes as soon as they return indoors. Also, the agency states that you should avoid applying DEET to your children's hands since, as any parent knows, kiddos love to stick their hands in their mouths and eyes. Finally, instead of spraying the repellent directly onto your kid, you should spray it onto your own hands, and apply it that way. And to protect infants under two months old, the CDC recommends using mosquito netting over strollers and carriers.

Some may wonder if it's even that important to protect children from Zika. After all, the scariest and most widely-reported outcome of the virus has so far been its effect on pregnant woman. This week, the CDC officially confirmed the link between Zika and microcephaly, birth defects that result in unusually small heads and brain damage. For most other people who contract the virus, including children, symptoms are mild — fever, rash, and joint pain, usually not lasting longer than a week. But the virus has recently been linked to a variety of neurological disorders in both children and adults, although further research is needed to officially confirm.

So far, most reported cases of Zika in the United States have occurred in travelers who were bitten by mosquitos elsewhere, and in people who contracted the virus through sexual transmission. However, experts are warning that the Aedes mosquito is present in up to 30 states during the warmer months, with Florida and Texas particularly at risk for possible outbreaks. So all in all, it seems better to be safe than sorry when it comes to protecting your kids. Break out that DEET.