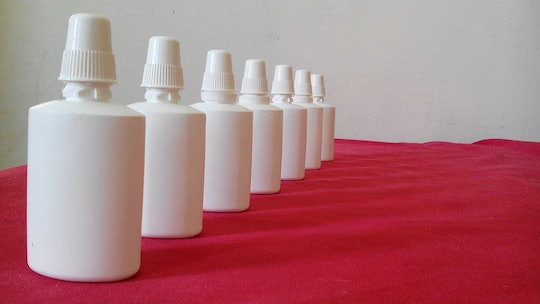 The Truth About Using Nasal Spray During Pregnancy

I was constantly congested when I was pregnant — it's like my nose was a clogged pipe that always dripped. I'm also severely allergic to mold and was pregnant mostly in the fall and winter — gah. Little helped, like nasal spray, but, can you use nasal spray during pregnancy, or is it just as off limits as aspirin and vodka?

When it comes to any medication you may take while you're pregnant, you need to check with your provider before taking anything. Every mother is different, and will react differently to medicine. However, in general, some medications, like acetaminophen, have long been considered safe for pregnancy, while others, like aspirin, are a no-go.

There are myriad types of nasal spray on the market: everything from allergy meds to your basic Afrin can be inhaled, so how do you know which ones are considered safe for pregnancy?

Nasal spray has been considered one of the best and safest means of administering medication to pregnant women because of the fact that the medicine is almost entirely absorbed directly into the affected area, and not thought to be as well-absorbed systemically as medicines in pill form, according to Hill-Crest Hospital in Tulsa, Oklahoma. However, according to an article in Livestrong, this may not be the case. Studies have shown that these medicines, specifically Afrin (Oxymetazoline), and Sudafed (Pseudoephedrine), are sent into the system more rapidly than once thought, noted Current Allergy and Asthma Reports, calling into question the safety of the medicines.

So much so that many providers overseas no longer recommend the use of Afrin or nasal Sudafed during pregnancies, suggested Cape Obstetrics and Gynecology.

The recommendations of OB-GYNs in the states is slightly different. While the American College of Obstetrics and Gynecology (ACOG) hasn't officially ruled out the use of Afrin or nasal Sudafed, many OB- GYNs, like the offices of Atlanta Gynecology and Obstetrics, wrote that Afrin should not be used for more than three consecutive days.

Afrin is tricky — it is known to cause something called "rebound congestion," according to The Mayo Clinic, which is when your body becomes accustomed to the drug, requiring more and more of it to reach any level of efficacy. It becomes like an addiction, but without the physiological aspect to the addiction that is required to consider it so. Because dosage is so important during pregnancy, the risks of rebound congestion should be avoided.

No matter how bad your congestion is, it's best to check in with your healthcare provider to make sure your medicine is right for you.