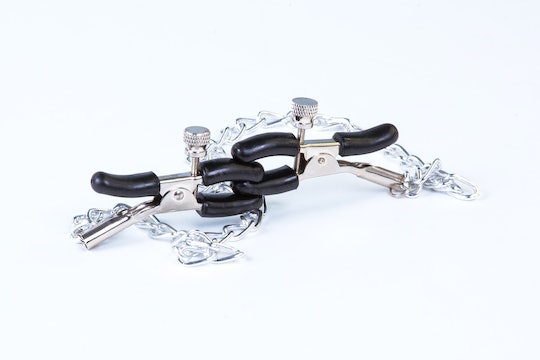 Can You Use Nipple Clamps When Pregnant?

If you're not into vanilla sex, you might wonder what kind of kinky play you can engage in during your pregnancy. Specifically, you might be asking, can you use nipple clamps when pregnant? For some couples, nipple play is the only way to get off.

According to Parents, there are safe ways to use sex toys during pregnancy. And, if it's a you used a lot in your pre-pregnancy days, then chances are that you can still use it while pregnant. There is, however, a catch, as, sex educator Lou Paget told Parents.

"Listen to your body," Paget said. "While pregnant, you're likely to feel sensation more intensely, so you might need to try a different toy or a smaller toy, or to use it in a new and different way."

When it comes to nipple clamps, however, Laino says that they are "usually fine early on" but moms-to-be should be aware that there is a risk of nerve damage to the nipple, which might cause issues with breastfeeding later on.

"There is also some level of comfort with regard to soreness for the woman," Laino tells Romper. "Often, with the hormonal changes, breasts in general can be sore and she may not want to have any breast play at all.  If this is something the couple is used to doing, this is a great time to have a conversation about what feels good and what does not."

Sexuality counselor and educator Aleece Fosnight tells Romper that women who are interested in using nipple clamps during pregnancy should make sure to do it during the right time. While women may actually enjoy nipple clamps more during pregnancy since your blood flow to the nipple are increases, there can be some pain and discomfort involved as well.

"Early nipple clamp use can cause increased pain and discomfort with the increase of blood flow, so recommended use would be between 18 and 34 weeks," Fosnight says. "Nipple stimulation has been encouraged to induce labor and is not recommended between 34 and 39 weeks as this can induce early labor. However, if you are ready to get the show started, after 39 weeks get those nipple clamps on."

For those that are wondering how close to their due date they can have sex, the good news is that nipple clamps may actually even help you on your due date, according to Fosnight. She says:

For couples who want to play with nipple clamps during pregnancy, the goal should always be safety and consent (whether pregnant or not). Couples may want to start with adjustable nipple clamps, which allow for you to "play with the pressure applied to the nipple and how much blood flow is limited to the nipple and can allow you to push limits with pressure as you get more comfortable with the clamp," Fosnight says. If, however this scares you or the pressure of the clamp becomes too much, you can also try vibrating nipple rings or tassels. The vibration can still stimulate sensations in the nipple and ultimately increase orgasm. Don't forget that your partner may also enjoy having their nipples teased and played with during this time, so start the conversation about nipple clamps early and don't be afraid to experiment — while keeping safety and comfort in mind, of course.