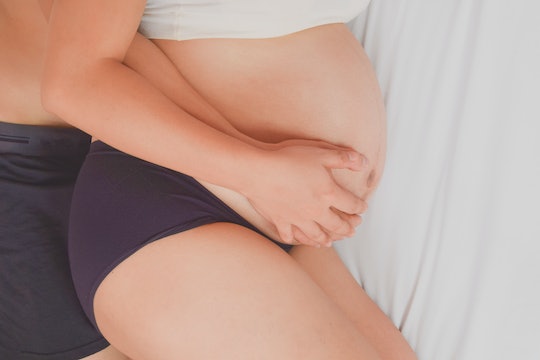 Can You Use Sex Eggs If You're Pregnant?

When you think of eggs and sex, your first thought is probably more geared towards fertilizing, and less towards rocks you stick in your vagina. But Gwyneth Paltrow says otherwise. Her site, GOOP, advocated the use of sex eggs for better intimacy, but can you use sex eggs if you're pregnant? What the heck is a sex egg?

More Like This
Pool Cannonballs Are Pretty Much A No-Go During Pregnancy
Your Guide To Hiking During Pregnancy
Lightning Crotch Can Actually Tell You These 7 Things About Your Pregnancy
Postpartum Sex Pain: Why It Hurts & What You Can Do

According to GOOP, sex eggs for your "yoni," (Greek for ladyflower) are a once closely-guarded ancient Chinese secret. (I swear, that's what it says.) They were used by the ladies in the emperor's harem to strengthen their vagina to allow them to provide their emperor with a highly-satisfying sexual encounter. A Buzzfeed video featured yoni egg expert Kim Anami, who stated that it also helps women achieve super-strong and healthy vagina muscles, which in turn, makes them more aware of their downtown. She stated that most women suffer from a numb vagina, and don't truly experience all their wonderlands have to offer by ignoring them in this regard.

In an interview with Shiva Rose on GOOP, Rose noted that these eggs harness the spiritual power of the stone, providing deep cleansing which can regulate the cycle (I found absolutely no scientific evidence of this in any journal), increase orgasms, (there is some science to this) and intensify feminine energy (this sounds pretty subjective to me). She also suggest that you form a ritual around your egg and keep it on an altar, because it's all about energy and intention when it comes to your personal relationship with your vagina rock.

But can you use sex eggs when you're pregnant? Julie Heinz, R.N., is a traveling obstetric nurse based in New York City and tells Romper that when it comes to sex eggs, it is not a safe practice to insert a mostly free object into the vaginal canal during pregnancy, especially as the sex eggs come in multiple sizes. The cervix is at differing stages of softness and ripeness during pregnancy, Heinz says, and it's best not to have something weighted pushing against it. When asked how a sex egg is different from a penis or a vibrator, Heinz notes that sex eggs aren't attached to anything, they're far up your vagina for extended periods of time, and if the tether were to detach, it could become even more problematic. She did go on to note that she's heard a lot of anecdotal evidence of the benefits of these eggs in the postpartum arena of life, noting that many women (once their doctor gives them the OK to use the eggs) swear by their sexual benefits.