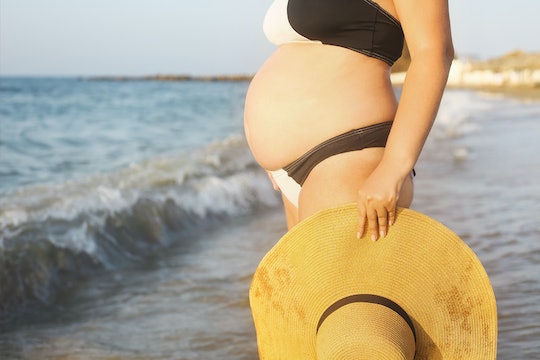 If you're anything like me, you've been slathering on SPF since you were a baby yourself. Nobody likes sunburns and skin cancer, right? And when everything else — from what you eat, to what you drive, to what you do in your free time — is questioned when you're pregnant, it's natural to wonder if this not-so-small part of your self-care regimen is safe. So what's the deal with sunscreen and pregnancy? Can you use SPF when you're pregnant?

The Skin Cancer Foundation tells us all why sunscreen is so important, saying:

"The United States government has officially identified ultraviolet radiation (UVR) both from the sun and from tanning machines as a known cause of cancer in humans. UVR produces DNA damage that may lead to mutations (abnormalities) in genes involved in the development of skin cancer. Therefore, along with other sun safety strategies, sunscreens that absorb or block UVR serve an important protective function."

Knowing the risks of not using sunscreen is important, regardless of whether or not you're growing another human being inside your body, but are there risks to pregnant women using sunscreen? The trusted people at Parents weigh in on this often broached question, saying that not only can you use sunscreen during pregnancy, but it's an absolute imperative. Pregnant people are not just vulnerable to undercooked fish, apparently, but they are also particularly vulnerable to sun damage. Parents goes on to explain, saying, "During pregnancy, pigment-producing cells called melanocytes kick into overdrive, making your skin more susceptible to discoloration (anything from freckles to melasma) when it's exposed to UV rays."

The experts at Parents recommend reapplying a zinc oxide or titanium dioxide (as opposed to chemical-based products) SPF 30 or higher every three hours, and considering investing in protective clothing that will keep your skin rom being exposed. The experts at What to Expect agree, saying:

"Look for lotions that offer UVA and UVB protection (called “broad-spectrum sunscreen) and a sun protection factor (SPF) ideally between 30 and 50. Products in which the active ingredient is zinc oxide and/or titanium dioxide — also called mineral or physical sunscreens — tend to be safer than chemical sunscreens for expecting women, as they are hypoallergenic and sit on the skin, instead of being absorbed by it."

But what about those of you who still really want a nice base tan? BabyCenter's dermatologist Sandra Johnson says that self-tanners can be a great alternative to spending a significant amount of time in the sun. Johnson calls most tanning lotions "harmless" dyes that sit on top of the skin, but she caution the use of spray tans whose chemicals can get into your lungs, or tanning beds which run the same skin cancer risk as the sun itself are not safe during pregnancy.