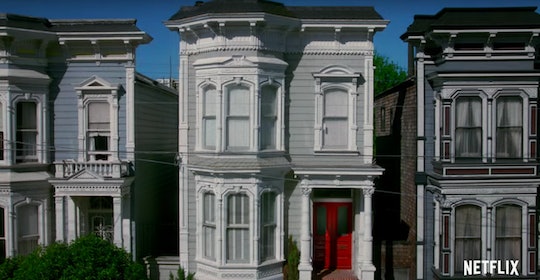 Can You Visit The 'Full House' House? Fans Of The Show Should Definitely Make The Trip

Now that Fuller House is about to premiere on Netflix, Full House fans are rediscovering their deep devotion to the Tanners. You may not be able to hang out with the fictional family IRL, but can you visit the Full House house? Delightfully, the answer is yes!

Netflix released the first teaser for Fuller House in December, and fans of the original show got to see the San Francisco sights they remembered well from the original: the Golden Gate bridge, a streetcar, and even the Painted Ladies. Perhaps the most exciting thing to see, though, was the original house with its inviting red door, welcoming everyone home. The real house is located at 1709 Broderick Street, San Francisco, CA 94115, according to Yelp. Though you can get your photo taken outside, there are a few caveats: Full House and Fuller House were both shot on set, so the interior never saw Danny's dustpan or Uncle Jesse's Elvis memorabilia. And if you want to recreate the Tanner family's picnic from the opening credits, one TripAdvisor user warns that you'll have to walk about a mile to Alamo Square. But if you're a Full House fan, a photo at 1709 Broderick may be enough of a delight to make it a worthy destination.

If you think the Full House house would be a fun place to visit, you're in good company. Bob Saget (TV dad Danny Tanner) stopped by in 2013 on his way to a radio show, according to Us Weekly. Saget said it was "creepy" to be there, but he ultimately seemed to enjoy the experience:

One guy on a moped stopped with a look that was like, 'Oh, come on!' Because it's like, I'm in it! If I'm standing in front of that house . . . some poor lady lives there and it's a well-known house now. People go there and see it like it's a cool thing. It's nice that it's not a negative memory. It's a home-cooked meal memory. So it was kind of weird being there.

John Stamos (who played uncle Jesse Katsopolis) also visited the house, PEOPLE reported. He took a photo outside in 2015, before the Fuller House frenzy set in. The portrait he posted on Instagram came with a caption: "Boy, these youngsters have 0.0 idea what they're missing.#Fullhousehouse. #TURNAROUND."

Seeing the Full House house in person would be fabulous enough. But meeting Danny or Uncle Jesse there? Have mercy.

Can't make it to San Francisco anytime soon? You can still revisit the '90s when all episodes of Fuller House premiere on Netflix Feb. 26.