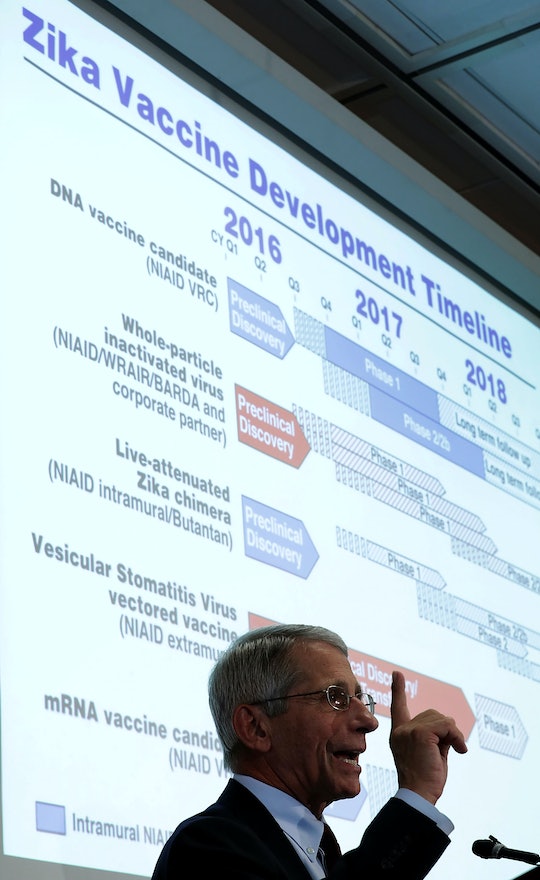 Can You Volunteer For The Zika Vaccine Trials? Recruiting Is Around The Corner

The National Institutes of Health announced trials for a Zika vaccine on Sept. 3, just days after public health officials issued a travel warning within the United States, after local transmission of the virus spread in Florida. The trials will take place over 44 weeks and 80 volunteers ages 18 to 35 are needed. So can you volunteer for the Zika vaccine trials?

The trials are in three clinical centers — one in Bethesda, Maryland; one at the University of Maryland in Baltimore; and one at the Hope Clinic of Emory in Georgia. Anne Oplinger, a spokesperson for The National Institute of Allergy and Infectious Diseases, told Romper that the Bethesda location has been fully enrolled, while the other two locations have not begun recruiting yet. She added that Emory's site "may be opening as soon as next week."

The National Institute of Allergy and Infectious Diseases, which is part of the National Institute of Health, assured the public of the vaccine's safety. "DNA vaccines do not contain infectious material — so they cannot cause a vaccinated individual to become infected with Zika — and have been shown to be safe in previous clinical trials for other diseases," the organization's press release ahead of the trial read.

What this means is that rather than containing a weakened version of the Zika virus, instead, the vaccine contains a slice of DNA called a plasmid. The plasmid carries genes that prompt the body itself to produce certain Zika virus proteins, alerting the immune system.

The U.S. government isn't the only one beginning a trial for testing a vaccine for Zika in humans — on Aug. 29, Inovio Pharmaceuticals announced its plan to test a Zika vaccine on 160 people in Puerto Rico, which has been hit hard by the virus. This is the second trial on humans; The first study, which was done in June, had 40 volunteers and is no longer recruiting.

According to a press release, volunteers for the National Institute of Health trial will receive the vaccination by a "needle-free injector" that pushes the vaccine fluid into the arm muscle. The 80 participants will be broken into groups:

The next steps include a study of between 2,400 and 5,000 people in areas where Zika infection is high will test if the vaccinated are less likely to become infected than the unvaccinated. This will take place as early as January, director of National Institute of Allergy and Infectious Diseases of Anthony Fauci said. The second phase of studies has not been funded, and Zika studies may stop if the government doesn't provide federal aid, Fauci said in an interview hosted by Research America.

The Zika virus is mostly spread through the bite of infected mosquitoes. The virus is especially dangerous to pregnant women because it can cause birth defects such as microcephaly, in which babies are born with abnormally small skulls.

The current first phase of the trial excludes women who are pregnant, breastfeeding, or who plan to become pregnant within 12 weeks after the trial is over. "The target of the vaccine will be women of childbearing age and their sexual partners," Fauci told CNN, "to protect their unborn children from birth defects."