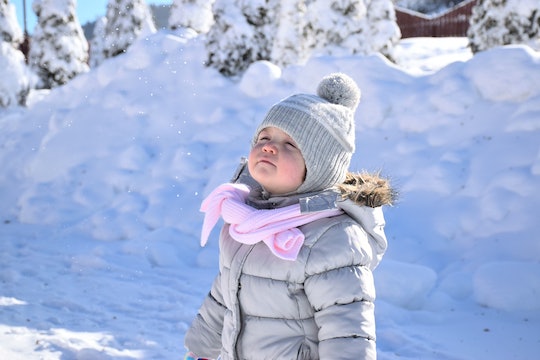 Can Your Baby Eat Snow? Keep These Things In Mind This Winter

One of the most magical parts of the winter season is snow. And along with snow comes season-specific delights like hot cocoa, candy canes, snowmen, snow angels, and of course, eating mouthfuls full of that frozen white stuff like it's candy. As a kid, you think nothing of eating snow. But as a parent, you might be a little bit more wary. What's the deal? Can your baby eat snow? Or is it a nostalgic pastime that you should keep in the past?

In an interview with NPR, professor of chemistry at the University of Arkansas at Little Rock Jeff S. Gaffney said that there's more than just water in all of that snow. Gaffney told NPR that your snow probably contains things like sulfates, nitrates, formaldehyde, mercury, and black carbon. But all the levels of those scary and distinctly un-edible sounding contaminants are all well below toxic. Meaning that eating a little bit of your favorite winter white stuff isn't going to hurt you, or your little one.

The University of California at Santa Barbara's Science Line took it a step further and explained that as snow falls, it picks up all kinds of particles in the air. This is how your snow might wind up with say, black carbon (which can easily be found in soot) in it. And though your fresh snow might come with a side of contaminants, it's the day old snow that you'll want to keep out of your baby's mouth. Old snow — even just day-old snow — can have dirt, twigs, pine needles, and more blown into it. And these contaminants, since they arrive after the snow has fallen, have more of a possibility of doing harm to your child than the traces of contaminants snow might gain as it falls through the air.

So the next time you're out building a snowman with your little ones, take note of your surroundings. A few bites of delicious freshly fallen snow isn't going to hurt them (or you for that matter), but if you're building igloos out of snow that's a few days old, or snow that's been plowed, you'll want to keep a close eye on all the tykes to make sure they're not shoveling in an entree snow with a side of dirt and grime.