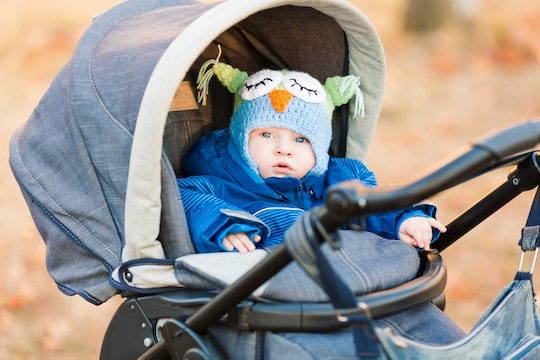 Here's How Much Skin Your Baby Can Show In Freezing Temps, So You Can Layer Properly

Right now in New York City, it's 14 degrees Fahrenheit with a wind chill of -10. It's dangerously cold. And yet, school is still in session, people are still going to work, and errands need to be run. A lot of times, this means parents are forced to brave this frigid climate with their tiny babies in tow, which is understandably concerning. Babies lose heat so quickly when they're little, so when it comes to bundling them up, you might be curious as to how much they need. Can your baby show skin in freezing weather, or do they need to be covered top to toe?

Dressing your baby isn't as tricky as it might seem. While they do lose heat more quickly than you or I do, according to the American Journal of Obstetrics and Gynecology, you'll dress them in much the same way you would dress yourself for comfort, if not more thoroughly. The rule of thumb when it comes to dressing your infant for extreme temperatures is to dress and cover them in several thin layers, with the exterior most layer having a layer of protection against moisture, according to the American Academy of Pediatrics. The only skin that should be exposed to the elements on your baby is that of their nose and mouth, as they are too young for a scarf or balaclava due to the risk of suffocation. They should, however, wear eye protection, lots of moisturizer, and a lip balm.

I am a neurotic person. I worry about way more than most people ever do. It's a part of my charm. Therefore, before I had kids (when we all think we know everything), I was terrified for all the babies I'd see out and about in 20-degree or colder weather. Didn't those parents feel how cold it was? Surely if they knew the danger in which they were placing their precious angels, they'd take their babies back inside where they belong, right?

As it turns out, this worry seems to be a uniquely American phenomenon. In other countries like Sweden, Norway, and Russia, babies are frequently bundled up just to go nap outside, even in freezing cold temperatures, reported TIME magazine. No, they're not dropping off their babies in a snowsuit to the park when it's negative 15, but 20 degrees? 25? Those babies are outside, napping away, breathing in the fresh air and hitting that REM cycle like it's their job.

The worry with exposed skin is frostbite and frostnip, according to the University of Michigan's Mott Children's Center. Frostnip causes numbness and a pale blue flush to the skin, whereas frostbite is blue, rubbery, painful skin. If this is such a concern, can your baby show skin in freezing weather if only for short periods of time? According to the center's website they can, and as long as you take frequent warming breaks, don't notice any bluish flushing to the nose or lips, and the rest of your baby is warm, he or she should be just fine.

It's even easier if you are carrying your baby in a carrier so that not only are they warm from their bunting, but they can move their (ice cold) nose and lips onto your body for heat. Fair warning, it's a bit shocking how cold their little noses can get. They also tend to run a lot, so be prepared with a hanky or lots of tissues. You don't want the fluids they're leaking to freeze to their face, which can happen.

It's colder than my in-law's first reception of me outside, so bundle up your baby, keep their airway clear, and wipe little noses. If you keep that up, you should be good to go.