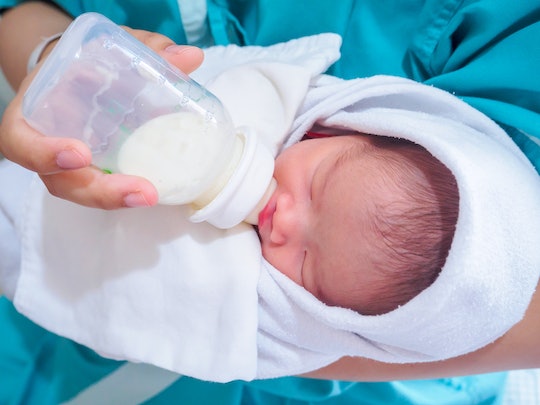 There are so many things I'd love to ask babies if they could express themselves with actual words. I'd love to know if my little one really does like that shushing noise I make every time I try to get them to sleep, or if they can tell that their father is always off key when he sings. I bet most of us parents would like to know if our baby can tell the difference between formula and breast milk, too. The answer, like babies themselves, is pretty interesting, so I guess we can't blame newborns for playing some things close to the chest.

There are more than a few differences between breast milk and formula. So, and according to KidsHealth, breast milk does taste different than formula — but it also tastes different from most other breast milk, too. In fact, in 2008 ABC News reported that your baby might notice the difference between the taste of your breast milk when you've been eating a lot of garlic, for example, or if you had broccoli for dinner last night. Breast milk takes on the slight flavor of whatever the mom producing it has eaten, so it's taste can vary from day to day and depending on a breastfeeding mother's diet.

Formula, on the other hand, always has a consistent taste, which is why it will always taste different than any kind of breast milk. In addition, and according to Breastfeeding For Dummies, the consistency or thickness of formula differs from that of breast milk. Breast milk tends to be a little thinner than formula, and formula can have a grainy texture if it hasn't been mixed sufficiently.

Now, as for the question of whether your baby can tell the difference or not, the question is more about whether your baby cares about the difference between breast milk and formula. If you're worried about switching your baby to formula, or supplementing your breast milk with formula, Parents says it really depends on the baby as to whether or not they'll actually notice or care. Just like adults' tastes can and usually do vary, some babies will drink anything that's put in front of them, while others are a little more picky.

If you're trying to introduce formula to a breastfed baby, keep in mind that you might have to try a few tricks in order to get them to make the switch. Some babies don't mind switching between breast milk and formula, but others prefer breast milk and refuse a bottle at the start.

One thing to keep in mind is that your baby might not want to take a bottle from you if they are reminded that breast milk is very close by. You can try having another person give formula to start, so that the smell of your breast milk isn't right by their nose.l Additionally, you can try sitting your baby up in a different position to try a formula bottle so they aren't reminded of breast milk by being in the same position as they would be to nurse.