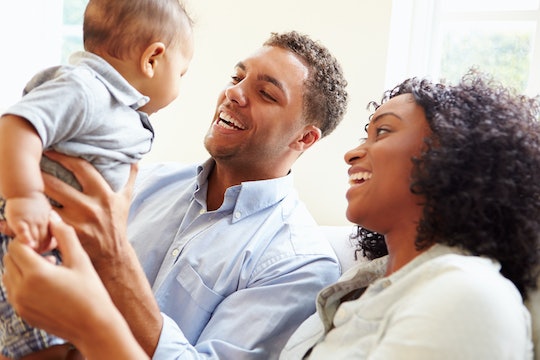 Can Your Baby Understand You?

Chatting up your baby is second nature to most caregivers, even if your little one is still a long ways off from being able to talk back. You likely find yourself going on about the trees in the wind, the apples in the store, and the toys in your baby's room in a nonstop narrative. But can your baby understand you when you're talking? Recent studies suggest your infant may get what you're saying from a surprisingly young age.

Granted, this idea may not come as news to most parents. Babies are keen observers of their world, as noted by Baby Center, and they want to understand and communicate with you as soon as possible. Although it's impossible to say definitively what babies understand of spoken language during their preverbal years, it's fun to imagine how they perceive the world.

And some research points to the idea that these lessons on language begin when your baby is still in the womb. According to a 2013 study in the Proceedings of the National Academy of Sciences of the United States of America, the parts of the brain that process sound are active during the third trimester, and fetuses exposed to a certain word in the womb appeared to recognize it by the time they were born. What developing babies make of this early exposure to language is anyone's guess, but it looks like your little one is listening in on your conversations even before birth.

Additionally, further research suggests infants may begin understanding language much earlier than originally suspected. As noted in a 2012 study from the Proceedings of the National Academy of Sciences of the United States of America, infants aged 6 to 9 months may already know the meaning of everyday nouns. The infants in this study were presented with a set of pictures, and a parent named one image in the set. In many cases, the babies would then look at the image of the named object, indicating some level of verbal understanding. It's kind of bonkers to realize that a 6-month-old baby may already know the difference between a picture of a truck and a bear. So the next time you're talking to your infant, remember that you're speaking to an attentive audience — even if the ability to hold a conversation is still a few years down the road.