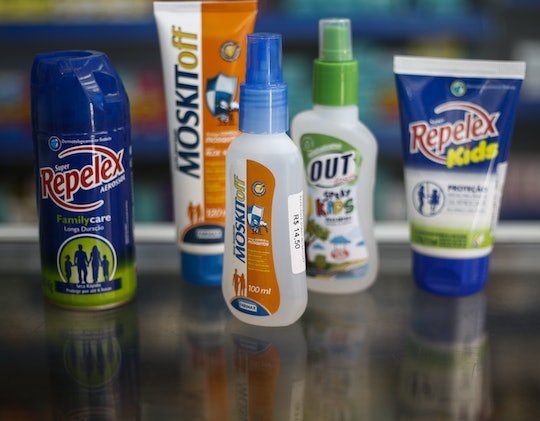 Can Your Child Get Zika At Summer Camp? Prevention Is Key

With the news about the Zika virus still sounding totally grim as warmer, mosquito-friendly weather is making its way to the United States, parents are understandably getting worried about how best to protect their kids (and themselves!) from the virus that has been deemed a public health emergency by the World Health Organization. Based on what is known about the virus, pregnant women and fetuses are the ones at risk for the most devastating effects of Zika (namely a severe birth defect called microcephaly), according to the Centers for Disease Control. But there isn't as much known about the risk Zika can pose to children who contract the Zika virus after birth and in childhood. For example, can your child get Zika at summer camp?

Even though a lot about the Zika virus is still unknown, it seems pretty safe to assume that anyone living in or visiting one of the 30 states confirmed to be home to the Zika-transmitting Aedes aegypti mosquito can potentially get the Zika virus. So that means that parents will probably want to step up their mosquito bite prevention strategies this summer, and make sure to stress their importance to their camp-going kids (this is not the time to skimp on the bug spray!).

For parents worried about their children contracting Zika, the most important thing they can do is minimize the likelihood that they will get bitten in the first place. According to USA Today, there are currently more than 300 confirmed cases of Zika in the continental United States, although so far everyone who contracted the virus had traveled to a country where the virus was present. But the CDC has also confirmed that the type of mosquito responsible for spreading Zika can already be found in an alarming number of states both throughout the South and also in some northeastern states. As the weather warms up, it seems almost inevitable that more homegrown Zika cases will appear — and, in fact, the virus is already being transmitted locally throughout the American territories Puerto Rico, U.S. Virgin Islands, and American Samoa. And, according to Dr. Anne Schuchat of the CDC, the spread of the virus there isn't likely to be mild, according to USA Today:

We are quite concerned about Puerto Rico, where the virus is spreading throughout the island. We think there could be hundreds of thousands of cases of Zika virus in Puerto Rico and perhaps hundreds of affected babies.

According to the CDC, "wearing insect repellant is the best way to prevent diseases spread by mosquitoes," and this applies to children as well as adults. How do you know if your bug spray is effective? Look for EPA-registered ingredients like DEET, picaridin, IR3535, which can be found in brands like Cutter, OFF!, Skintastic, and Skin So Soft Bug Guard Plus. Oil of lemon eucalyptus (OLE) is also a recognized bug repellent, although parents need to be aware that it should not be used on children under the age of 3.

Bug sprays should be used only on exposed skin and on top of clothing, and applied sparingly — dousing yourself or your kids in bug spray won't be any more effective than applying just what you need. When applying to the face, spray the products on your hands first and then apply it on your child's face, and wash it off with soap and water once they've come inside. And if your children will be spending time away from you at camp, make sure they know how to use bug spray safely.

Another good prevention strategy? Cover up as much as possible. Wear long sleeves and pants whenever possible (although, admittedly, that can be hard to do in the heat), and according to the Daily Mail, light-colored clothing is more effective than dark clothing, as mosquitoes are more attracted to dark colors like black and navy blue. Covering up could be especially important if you know you or your children have Type O blood — studies have shown that mosquitoes are more than twice as likely to land on people with Type O blood than Type A or B.

While it may not be possible for little campers, trying to stay indoors inside air conditioned buildings is also a good strategy to prevent mosquito bites. Alternatively, parents might want to buy their kids mosquito bed nets to avoid getting bitten at night.

While it is pretty clear that Zika should definitely be something that parents are thinking about and trying to prevent, the good news at least seems to be that adults and children who contract Zika (at least, those who contract it after they are born) will most likely experience only mild symptoms — if they experience any symptoms at all. Zika symptoms include joint pain, rash, fever, headache, and pink eye, according to the CDC.

But since the virus is a major risk for pregnant women, in addition to individual prevention techniques, everyone living in a potential Zika zone can help do their part by being mindful of eliminating standing water where mosquitoes breed, according to CNN. For most people, this usually means emptying flower pots, kiddie pools, buckets, or anywhere else where water might pool outdoors.

Since there is currently no vaccine for Zika, preventing transmission is the best way parents can keep their kids (and themselves) safe this summer.