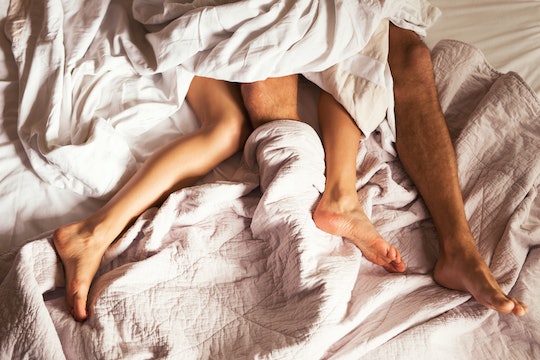 Will Your Orgasm Push Out Your Partner's Sperm During Sex?

Sex is messy. This is a fact as clear as the sky is blue or that you will get your period if you wear white. How messy it gets is dependent on the couple, but it may have you asking questions like, "can your orgasm push out sperm during sex?" Because that last one seemed to lead to some seriously wet sheets, and someone is going to have to sleep on that spot or strip the bed. (Way less awkward in a long-term relationship, but then again, after you've been together a long time, there might be some preventative action taken in the form of a pre-sex towel throw, because you care. It's really the little things.)

You might also be curious as to whether or not this is the case if you and your partner are trying to conceive. It seems counterproductive to expel the sperm if you're trying to get pregnant, right? Well, it turns out this is a subject just ripe for study. An academic science text search yielded hundreds of results from just the past four years. The comings and goings of what happens to his sperm after the woman orgasms is apparently the talk of the scientific community.

But can your orgasm push out the sperm during sex? Most current studies posited the opposite is true, according to The Archives of Sexual Behavior, but whether or not that helps a woman conceive is unclear, according to the study.

There is actually a study on studies about sperm and the female orgasm titled, "Can the Controversy About the Putative Role of the Human Female Orgasm in Sperm Transport be Settled with Our Current Physiological Knowledge of Coitus?" It's basically science speak for "everyone assumes the lady's orgasm sucks in the sperm, and that might not be true." However, it's also not false, according to the study. What the study found is that while an orgasm may help the sperm move in the right direction, there isn't enough organic physical data not skewed by pharmacological aid to determine if it actually does, and until then, they are assuming that the woman's orgasm doesn't influence the movement of sperm in either direction. Most of the studies weren't completed in a non-clinical environment with unassisted orgasm — most of the studies were completed using injections that mimic orgasm in women. (I do not volunteer for that study.) Therefore, the data seems to be chiefly unreliable.

But as with most research, there's more. A study published in the book Human Sperm Competition arrived at a somewhat different conclusion. It noted that the orgasms happening in the genuinely aroused woman do in fact lead to higher rates of conception than women who are not genuinely aroused, lending credence to the belief that the female orgasm is akin to the dude on the runway with the orange vest and flashlights guiding the planes at landing. Either way, your orgasm likely isn't shoving out your partner's sperm any more likely than it's pulling them in. So don't feel like you have to skip the orgasm — your partner's sperm are self-guided missiles on a mission and they know where they're going.