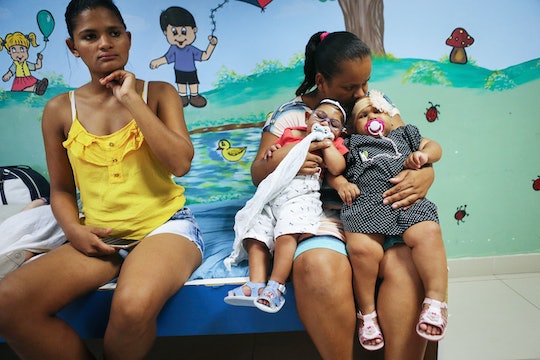 Can Zika Affect A 1-Month-Old Baby? It's Not Too Risky

The discussion around Zika has centered largely on its affects on pregnant women and their babies, since the virus has been linked to major birth defects like microcephaly and other neurological disorders. Because that is mainly who Zika affects. But everyone is at risk of contracting the virus and knowing how Zika can affect your one-month-old, for example, means being able to catch the virus quicly and treat it before it gets out of control.

Zika is transmitted by getting bitten by a Zika infected mosquito obviously, but it can also be sexually transmitted. When it comes to infants, however, it's all about the breast milk. Zika virus has been reported in breast milk, but a connection between the breast milk and Zika outcomes hasn't been proven yet, according to the Centers for Disease Control. It's something to think about, but not something to freak out about as the CDC says that the "evidence suggests that the benefits of breastfeeding outweigh the theoretical risk of Zika virus infection transmission through breast milk."

In fact they even go as far to suggest that "mothers with Zika virus infection and mothers living in areas with ongoing Zika virus transmission to breastfeed their infants."

Because once an infant has Zika, it's just like any other person. Of course, infants are so tiny and a fever, a rash, and the aches and pains is a pretty big deal. But the symptoms so pass within a week, just like for anyone else, so the risks of longterm illness or neurological problems are very low, health officials say.

If you suspect your infant has Zika, taking them to the doctor right away is important. According to the CDC, testing in infants has proven very difficult so far. Because of "cross-reacting antibodies against related flaviviruses," the instances of false positves are pretty high.

The real story is that there is lots of evidence surrounding Zika but not very many hard conclusions about its long term effects and how it affects everyone down the road. In fact, to get some more insight, the National Institutes of Health is planning on studying some American Olympic athletes in Rio this August to better understand the virus and how it's transmitted. The World Health Organization says that the risks of a Zika outbreak are low enough so that the games will go on, it's worth using the Olympics as a way to gather as much information about Zika as possible.

Zika shouldn't keep you up at night, but it's worth getting some good insect repellent and covering you and your little one up when you head out this summer.