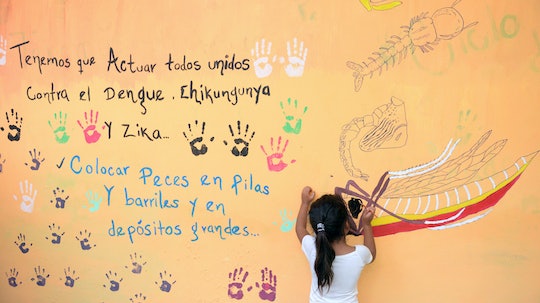 Can Zika Kill Kids? It Will Spread Across The United States This Summer

In April, the Centers for Disease Control and Prevention reported the first Zika-related death in the United States. The victim was a Puerto Rican man in his '70s. He died in February. With the risk of the Zika virus spreading to the continental United States becoming more serious as mosquitos spread across southern states, researchers and health organizations are scrambling to prepare. The virus' effect on infected pregnant women can be devastating, but can Zika kill kids?

The report issued by the CDC said that the Puerto Rican man's death was a result of an immune reaction to the Zika infection. He developed a condition known as thrombocytopenia, which is when the blood has very low platelet levels and difficulty clotting. He died from internal bleeding, which is not a typical symptom of the viral infection, but occurred after immune complications. The report provided no details about his treatment, but emphasized the growing size of the outbreak in Puerto Rico.

Tyler Sharp, the chief epidemiologist at the CDC's branch in San Juan, Puerto Rico, addressed the media about the tragic loss and what it means for the country. According to CNN, he said the man's reaction to the virus was due to a rare autoimmune condition called ITP (immune thrombocytopenic purpura) that can accompany infections diseases, like Zika.

This is further evidence that the danger of Zika is not necessarily the virus's symptoms, but their resulting complications. Zika's symptoms can be relatively mild. According to the CDC, symptoms of Zika can include a rash, pink eye, sore muscles and joints, and a fever. Like a common flu, they can last up to a week. Because those symptoms are so general, it can make Zika very difficult to identify and track, except with testing. More than ever, researchers are urging travelers — or anyone who shows symptoms, especially pregnant women — to seek testing.

While the risk of Zika contraction is biggest for pregnant women, it does pose a risk to children, too, because of their weaker immune systems. Since there has been no evidence of a young child getting Zika through breastfeeding, the most likely mode of transmission is through a mosquito bite. There are still a lot of unknowns when it comes to the virus, including whether infection could affect kids' development. What is certain is that the infection could cause an autoimmune reaction if symptoms become more serious, and then Zika can become life-threatening.

Though there are several organizations working on a cure, there is no vaccine for the Zika virus. As of now, the best way to protect your kids is to seek testing if they show symptoms and use insect repellent and nets to prevent mosquito bites.