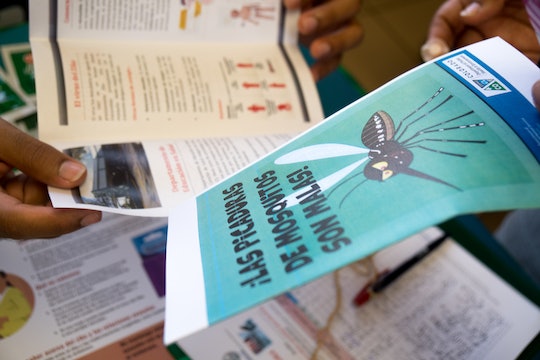 Can Zika Spread Through Sweat? A New Study Already Found The Virus Present In Tears

A new study from the Washington University School of Medicine in St. Louis has made an unfortunate discovery about the Zika virus. The team of researchers believed that the virus was moving more quickly than mosquito-borne transmission alone would allow. They wanted to investigate whether it was possible for the virus to spread from human to human in other ways besides through sexual intercourse. The researchers examined if Zika was spreading through other bodily fluids, such as sweat, saliva, urine, and tears. It's not possible for Zika to spread through sweat, however, the study found the virus present in human tears.

The research team at the Washington University School of Medicine discovered that it's possible for Zika to live in eyes as they have found genetic material from the virus in tears. Some patients who are suffering from Zika also contracted diseases of the eye such as conjunctivitis and uveitis. Thirty percent of babies born with Zika also show various eye defects, such as inflammation of the optic nerve and even blindness, as well.

It's possible that this new research could explain the connection between the two. Michael S. Diamond, MD, PhD, one of the senior authors of the study said the eye could be "a reservoir for Zika virus."

The study was performed on mice by injecting them with Zika under the skin similarly to how mosquitos spread infections. A live strand of the virus was then found in the mice's eyes, as well as genetic material in their tears. While the researches believe "there could be a window of time when tears are highly infectious and people are coming in contact with it and able to spread it," further research needs to be done to prove this hypothesis.

The researchers were able to confirm the presence of Zika in the mice's eyes, however, they are still unsure how the virus traveled there. The virus may have potentially traveled through the blood-retina barrier that separates the eye from the bloodstream, according to the study, or it may have gone into the brain and used the optic nerve that connects to the eye from there.

The team at Washington University School of Medicine would like to continue their research with human trials. Even if their hypotheses about Zika spreading through human tears proves false, studying the eye could have other practical effects: The researchers believe they may even be able to find a less painful way to diagnose Zika through the eye.

Even though new discoveries are being made about this virus everyday, remember to stay cautious and take care of yourself. Wear bug spray, especially if you're expecting.