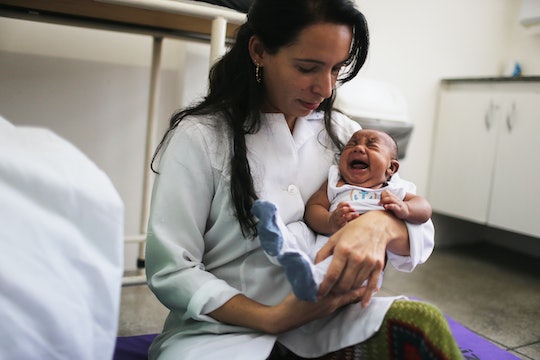 Can Zika Virus Harm Babies After They're Born? It's Officially A Global Emergency

The World Health Organization declared Monday that the Zika virus spread a "public health emergency of international concern," according to CNN. The implications for pregnant women are substantial since infection appears to be linked to microcephaly, but can Zika virus harm babies after they're born? Though infants can be infected with the virus, it seems to manifest similarly to the way it would in adults.

Most individuals infected with Zika virus are asymptomatic and suffer no long-term consequences, The New York Times reported. Though the disease can sometimes lead to temporary paralysis, it's a rare complication. The primary reason Zika virus poses a global danger is because of its potential to impact fetuses. Prior to the Zika virus outbreak, Brazil reported "fewer than 150" cases of microcephaly in 2014, according to CBS News. Microcephaly causes small head size in infants, though it can have a serious neurological impact.

Since Zika virus spread, Brazil reported more than 4,000 cases of microcephaly. Because it's typically found in tropical climates, The New York Times reported that few people in many parts of the world have immune systems prepared to handle it. Now that the virus is spreading globally, World Health Organization (WHO) director general Margaret Chan advised pregnant women to avoid traveling to places where Zika virus is common or, if they're already in an infected area, to take precautions to avoid mosquito bites, according to the BBC.

Infants may be diagnosed with a congenital Zika virus infection, the CDC reported, which is the kind potentially linked to microcephaly. But if a baby contracts Zika virus after being born, it may appear similar to illness in adults. Even if someone is infected, the likelihood of getting sick with Zika is only one in five, according to the CDC. An individual who does display symptoms may get a fever, see a rash or conjunctivitis, have joint and muscle pain, or develop a headache. Generally, a blood test can help doctors determine whether someone is infected with Zika virus or another disease (both chikungunya and dengue are mosquito-borne illnesses with similar symptoms). Though Zika virus infection cannot be prevented with a vaccine or cured with medication, people experiencing illness can generally expect to have mild symptoms for no more than a week.

Though Zika virus does not seem to be as dangerous to babies as it is for fetuses, any manifestation of symptoms in an infant is worth an evaluation by a doctor. If you plan to take your family on vacation to an area where Zika virus is common, check with a physician for guidance on how to stay safe.