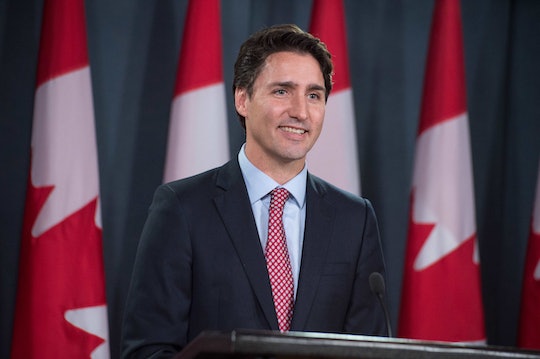 Canada Is Accepting Syrian Refugees, But There's One Big Problem With The Plan

Canada announced its Syrian refugee resettlement plan Tuesday, which includes a target of resettling 10,000 Syrian refugees in Canada by the end of the year without endangering Canada's national security. Amid widespread U.S. fear of refugees, Trudeau assured reporters Monday, "Robust security planning continues to be an extremely high priority." The plan, which is expected to cost the government CAD$678 million, involves screening thousands of Syrians overseas in Jordan, Lebanon, and Turkey before bringing them to Canada — which is all well and good. But there's one huge problem with the program: it excludes single male Syrians seeking refuge.

However, Canada should be accepting single males who need resettlement. The move to exclude them seems like it is based on appeasing people scared of terrorism on our home turf more than it seems based on logic. Yes, a terrorist posed as a refugee in the Paris attacks, and that is terrifying. But instead of turning our backs on a persecuted group — many young men are fleeing the prospect of forced conscription to ISIS' ranks — shouldn't we be improving the security screening and biometric databases already hailed by the government?

Former director-general of two government refugee programs, Gerard Van Kessel, voiced concerns to an advocacy website, saying, "If you have an 18-year-old son that's part of a family, is that person coming in? Also, the husband? What's going to be done there?"

As a Canadian citizen, I applaud Canada's acceptance of refugees, but its leaders are still being influenced by fear-mongering. There are security concerns to be dealt with, but if our screening is legit, let's use it and help provide refuge to all who need it.