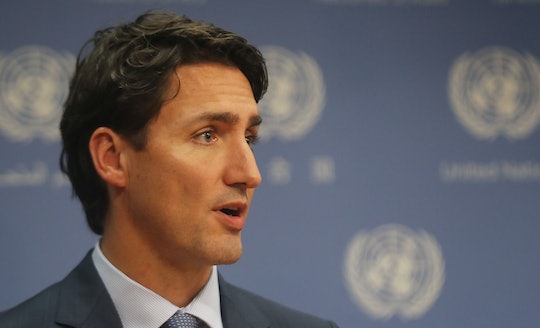 Canada Opens Its Doors To Refugees After Ban

After President Donald Trump signed an executive order calling for the "extreme vetting" of immigrants on Friday night, chaos ensued. Immigrants were being stopped at airports and some were even being sent to the country where they had been before. While there might have been some confusion surrounding the order in the United States, given conflicting statements from the Department of Homeland Security and a judge in New York, in the meantime, Canada has opened its doors to refugees making one thing clear — Canada is here to help anyone turned away from U.S. doors.

On Saturday, Canadian Prime Minister Justin Trudeau had a clear message for refugees on Twitter: Canada is here to help immigrants, not block them from entry and safe haven. "To those fleeing prosecution, terror & war, Canadians will welcome you, regardless of your faith #WelcometoCanada," Trudeau tweeted. Trudeau's spokeswoman, Kate Purchase, further elaborated on his statement, telling The Associated Press in a statement,

The Prime Minister is looking forward to discussing the successes of Canada's immigration and refugee policy with the president when they next speak.

This outpouring of support from Canada shows immigrants that during this tumultuous time in the United States, one country will welcome them, regardless of their religion, where they were born, or who their parents were. Especially after what happened during the weekend, a safe place like Canada to which parents can take their children, for families to retreat, and for those fleeing persecution at home to find rest, is surely appreciated.

So how did it come to this? What happened following Trump's executive order on Friday was a little confusing and has only served to complicate matters. According to CNN, White House officials were unsure of what exactly the order entailed when Trump signed it on Friday. The order implements a travel ban "from seven Muslim-majority countries for 90 days and suspend all refugee admission for 120 days," according to CNN. But because of the immediacy — and vagueness — of this executive order, confusion mounted at airports on Saturday.

The result? People being detained at airports all across the nation. Some were held for hours and others were forced to return back to their home countries.

But with the chaos came a show of humanity and scores of people coming together to do some good. Lawyers worked for free from airports to answer questions and "prepare habeas corpus petitions" for those being detained, according to Twitter. At multiple airports around the nation, protesters came together to let it be known that these kinds of executive orders would not be tolerated. And on Saturday night, a federal court in New York granted a stay that would "block the deportation of all people stranded in US airports" under Trump's ban, according to CNN, though, given the DHS's recent statement, the applicability of that stay is in limbo. Trudeau's tweet about Canada is just another example of this kind of humanity.

It is absolutely terrifying for people — especially those who are here in the United States legally — to return to the United States from one these seven countries, only to be detained or turned away because of their nationality, or for anyone seeking refuge from war and famine to be turned away because of their religion. By opening its doors, Canada is sending a clear message: Some people are still fighting for them.