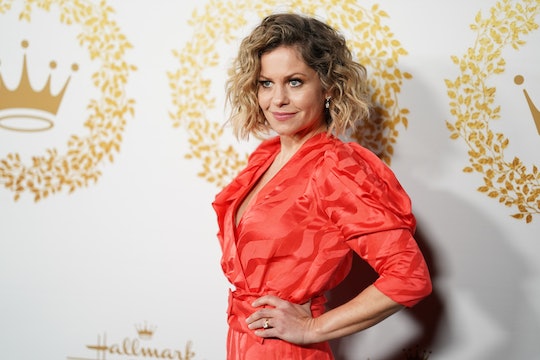 Candace Cameron Bure accepted a Kid's Choice Award for her show, Fuller House just days ago... at the exact same time that her costar, Lori Loughlin, found herself in some potential legal trouble, according to reports. And while she accepted the Kid's Choice with the statement that "a loving family sticks together no matter what," finally, Candace Cameron Bure speaks out about Lori Loughlin and the alleged college admissions scandal.

But when hosts Hoda Kotb and Kathie Lee Gifford asked the Full House alums about all of the reports regarding Loughlin's alleged actions, Cameron Bure made herself perfectly clear: she supports her former co-star, but doesn't want to speak in detail about anything related to the situation.

Loughlin, as you might recall, played the lovable Aunt Becky to Cameron Bure's responsible D.J. Tanner, the oldest sibling in a house full of kids and relatives.

Loughlin, as Newsweek reported, was indicted as part of an FBI sting surrounding an alleged scam in which wealthy parents allegedly bribed college personnel or faked their children's test scores — all to gain their progeny spots at elite universities.

Loughlin was charged with a single count of felony mail fraud, as per Variety, along with actress Felicity Huffman. The outlet noted that Loughlin's husband, designer Mossimo Giannulli, was also charged.

The couple allegedly paid to have their daughters designated as crew recruits, which may have helped them gain admittance to the University of Southern California, where both girls were enrolled until the massive scandal broke, as Elle confirmed.

It's a mess all right, but Cameron Bure handled herself like the seasoned media pro she is when asked straight out about the situation on Today.

"It’s too personal to us and we would never want to talk about someone that’s such a dear and close friend," Cameron Bure explained, as per Us Weekly. "I’ve already said that we are family and we stand by each other and pray for each other and we’ll always be there for each other." The entertainment magazine noted that Sweetin nodded in agreement.

This is an interesting situation to find yourself in, if you're Bure, Sweetin or any of the stars of the original show or spinoff.

Now, don't get me wrong. News of an alleged widespread national ring of lying, cheating, privileged parents who were willing to do anything to give their kids a leg up over teens who really deserved Ivy League spots sickens me, both as a mom and a tax-paying member of the middle class.

I mean, the case is downright shocking (including the part where the genius adult allegedly took the SATs for kids or corrected their answers after the fact, knowing how to up a score just enough so it wouldn't look suspicious, as USA Today reported).

But this must also be a tough time for Loughlin's co-stars. They've worked with her for decades now. Plus, you can disapprove or hate someone's actions (or, in this case, alleged actions) and still love them personally.

Bob Saget, also known as patriarch Danny Tanner, may have said it best when he was stopped by TMZ recently in Los Angeles, according to Good Housekeeping. "You love who you love in your life ... I’m on the team of people that I love, but life’s complicated," he noted.

That's for sure. There will be more to come on all of this as the case's prosecutors move forward. And unfortunately, worried loved ones such as Cameron Bure will have no choice but to watch and wait.