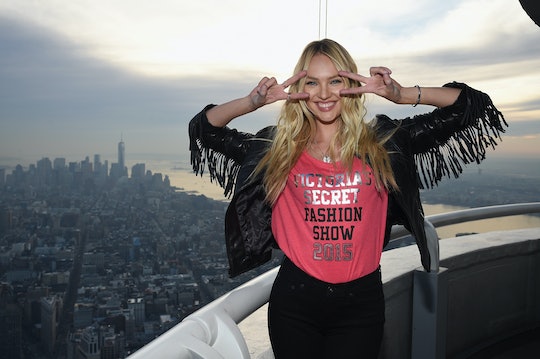 Candice Swanepoel Revealed The Sex Of Baby No. 2 With The *Sweetest* Video

One of Victoria's Secret's most adored angels is about to be a mom of two, sharing the pregnancy news with her fans last year. And in a new, adorable video on Instagram, Candice Swanepoel revealed the sex of her second child and enlisted the help of her 15-month-old son, Anacan, for the super sweet reveal. And it looks like Swanepoel and her fiancé Hermann Nicoli will be adding another little boy to their brood very soon.

In the adorable Instagram video, Swanepoel and little Anacan are seen hanging out in the sun. Anacan is shown kissing his mother's growing bump throughout the cute clip. Swanepoel captioned the video with the words, "My boys", and accompanied it with two heart emoji and two boy emoji. On Dec. 15, 2017, Swanepoel first announced that she was pregnant with another child and the news was also shared on her Instagram account. In a photo of her cradling her bump, Swanepoel wrote, "Christmas came early ... #2."

Swanepoel has not released her baby's due date, according to Refinery 29, but it's clear that she is past her first trimester and is enjoying her pregnancy. Most recently she was spotted vacationing in Brazil with her family and friends, taking in some fun in the sun. And of course, filming adorable Instagram videos with little Anacan.

With Swanepoel's cute video, fans commented tons of heartfelt words on her Instagram account. One user wrote, "This is so cute," while another wrote, "Congratulations gorg."

Swanepoel and her fiance became engaged to in 2015 according to E! News, but they actually met about 12 years ago in Paris, when Swanepoel was just 17 years old, as reported by the Daily Mail, and they've clearly managed to maintain a strong relationship since.

Before Swanepoel revealed her pregnancy with the couple's second child, she opened up to People about motherhood with Anacan so far. "He’s been so sweet and been so good. Everybody is like, ‘You’re so blessed with a good baby,'" she previously told the publication, "I feel like the next one will be a terror just to remind me.” Hopefully, for mom and dad, little Anacan's brother will follow in his footsteps.

Like Swanepoel, her fiance is also a model and his Brazilian heritage has had quite an influence on his bride-to-be. For example, their son Anacan's name was inspired by Nicoli's roots, according to People. In an interview, Swanepoel explained the meaning behind Anacan as this:

It’s an indigenous name from the Amazon. I’ve always been amazed by the Indian culture of Brazil because I came from such a strong culture in South Africa — the Zulu area. Strong culture is really amazing to me, so we were talking names [and] it was the first one that popped into our heads that we both liked.

With Swanepoel's desire to incorporate culture into the name of her first son, it makes one wonder if she'll do the same for her second son. Swanepoel even had a safari-themed baby shower to celebrate her first pregnancy.

According to E! News, Swanepoel is good friends with fellow Victoria's Secret model Behati Prinsloo and the two greatly bonded when they were pregnant at the same time with their first bundles of joy. Prinsloo, who is married to Adam Levine, had a daughter named Dusty Rose, while Swanepoel had little Anacan. Now, the two are pregnant together again and Prinsloo is due any day, as Levine revealed to Jimmy Kimmel on Jimmy Kimmel Live! just a couple days ago.

With this being her second baby boy, Swanepoel may have an idea of what to expect. But, every birth is different, so can anyone really be totally prepared? Whatever the case, Swanepoel appears to be over the moon about her pregnancy with her second child and the rest of the world can't wait to meet her family's new bundle of joy.