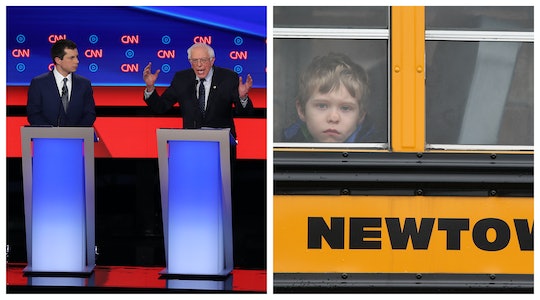 Candidates May Have Gun Violence Stories, But That Still Doesn't Help Our Kids

Almost an hour passed before the 10 candidates standing on the Democratic presidential debate stage in Detroit were posed a question about gun control on night one of the CNN Democratic debates in Michigan. Night two saw no debate at all. Meanwhile, half a country away in Northern California, the family of 13-year-old Keyla Salazar, who was shot and killed in one of two mass shootings that occurred in just two days in the United States, were planning her final arrangements. "We were preparing to have a birthday cake and be able to be with her," her aunt, Katiuska Pimentel, told CNN. "Now we have to prepare for a funeral."

There have been 2,186 mass shootings in the United States since Dec. 14, 2012, when a gunman walked into an elementary school and murdered 26 people, including 20 6- and 7-year-old children. Columbine. Virginia Tech. Aurora. Parkland. Las Vegas. Charleston. Pittsburgh. All communities made infamous as the result of this country's failed gun laws. Schools. Movie theaters. Outdoor concerts. Places of worship. All made unsafe by this country's elected leaders, and their continued inaction and shameless decision to forego passing legislation that would combat the epidemic of gun violence. To say nothing of the 3,000 children a year to die from gunshot wounds in an inconceivable mix of homicides, suicides, and unintentional firearm deaths canvassed by researchers for a 2016 special report in the New England Journal of Medicine.

Democrats have made the need for gun control a pivotal part of their political strategy, and rightfully so. Not only is it the only moral and ethical reaction to the murder of 20 kindergarteners, but it's politically advantageous. A reported six in 10 Americans want stricter gun laws, according to an Oct 17, 2018 Gallup Poll. Sixty-one percent of voters consider gun control to be an important factor when choosing a candidate, and 24% believe a candidate must disclose their views on gun control. It is not a "losing" issue — even 89% of Republicans support universal background checks, according to a March 2019 Quinnipiac University poll.

But simply talking about the need for common-sense gun laws, and how the lack thereof has continued to impact American families, isn't enough. Unfortunately, that's all the candidates on the presidential debate stage seemed capable of doing — offering a politicized version of "thoughts and prayers."

I was part of the first generation that saw routine school shootings. —Mayor Pete Buttigieg

“Nobody up here is going to tell you that we have a magical solution to the crisis,” Senator Bernie Sanders (D-VT), said. “I have a ‘D-’ voting record from the NRA. And as president, I suspect it will be an ‘F’ record.” And when Don Lemon asked Pete Buttigieg, mayor of South Bend, Indiana, how he planned to combat gun violence, he responded by detailing the way that violence had personally impacted him, as someone who was a junior in high school when the 1999 shooting at Columbine High School took place.

“This is the exact same conversation we’ve been having since I was in high school," Buttigieg said. “I was part of the first generation that saw routine school shootings. We have now produced the second school-shooting generation in this country. We dare not allow there to be a third.” "Like far too many people in America, I have been personally impacted by gun violence. Had an 11-year-old nephew, Jeremy, shot and killed on a playground," said Gov. Bullock of Montana, who saw both sides of the issue, per the New York Times.

There was no discussion on policy, or how the candidates were going to manage to pass common-sense gun legislation; no discussion of concrete solutions, aside from the need to "get the money out of politics" and the continued reference to the nefarious NRA and the grip of their cold, dead hands on the Senate.

Wherein lies the problem with these debates in particular, and how our politicians discuss gun violence in general: A moment of performative wokeness and an exercise in personal narratives becomes far more important — more viral — than an in-depth discussion on policy. Six of the 10 candidates were given a chance to discuss gun control, according to The New York Times' analysis. Of those six candidates, Buttigieg spoke the longest: an astounding 1 minute and 47 seconds.

Like far too many people in America, I have been personally impacted by gun violence. Had an 11-year-old nephew, Jeremy, shot and killed on a playground. —Montana Governor Steve Bullock

So politicians rely on carefully crafted narratives that prove that, in some way, they truly understand the suffering those who've lost family members to gun violence have endured. The goal is to present to would-be voters a palatable amount of empathy, instead of proving you're the most capable person to prevent future loss of life. Stories of "growing up in hunting country" and bragging about "F" NRA ratings and reminding the country that you came of age a time when school shootings were emerging as the new "American way," does nothing to actually protect our children from gun violence.

Many of us have grown up watching students run from their schools in fear, their hands in the air as tears stream down their fear-stricken faces. We've listened to our children detail the shooting drills they're now subjected to on a daily basis. We are one school shooting generation raising another school shooting generation. It is safe to say we have all been impacted by gun violence in some way, though some of us far more than others.

What we need is change — not tone poems about the pain felt by those impacted by the absence of change. We need real, legislative change. And in order to ensure that change will come, we need elected officials to tell us how they plan to drive that action. Tell us your plans. Lay out your proposals. Be thorough. Save your heartwarming anecdotes, and give us cold, plain solutions. "You're out of time," as Jake Tapper repeatedly warned.

Because the next school-shooting generation doesn’t have forever — 20 kindergarteners will never grow up to wonder why all we had to offer them were our stories.

More Like This
13 Is "Too Early" For Kids To Be On Social Media, Surgeon General Cautions
14 Recipes For Sick Kids When Everyone's Tired Of Canned Soup & Crackers
Michigan Right-Wing Group Wants To Erase LGBTQ+ Sex Ed
Teacher Shot By 6-Year-Old Student Told School He Had A Gun, Was Told To "Wait"
What Parents Are Talking About — Delivered Straight To Your Inbox