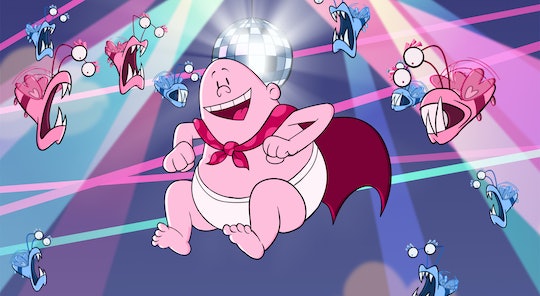 Captain Underpants Gets Into A Tricky Situation In This Exclusive Clip

DreamWorks' The Epic Tales of Captain Underpants returns to Netflix for its second season on Feb. 8. And the new episodes will bring a whole new set of challenges for besties George and Harold. This time they have to deal with the formidable team of Melvin and Cyborg Melvin running the school. And that new threat may be what prompts Captain Underpants to go on a mission in this exclusive clip.

The clip opens with George and Harold heading to their treehouse with Captain Underpants in tow. Once there, they reveal their secret plan to steal something called the Suck-a-trash 2000. Unfortunately, the scheme might be a little too complicated for the good Captain to remember every last detail. And that could be a problem.

First, Captain Underpants is supposed to sneak into Cyborg Melvin's office and then he has to carefully navigate the field of lasers that guard the Suck-a-trash. Once he gets through them, he has to gently remove the can-shaped device and replace it with an actual can before any of the alarms are set off. Easy-peasy, right? Not so. It doesn't matter how many shockingly good marker drawings the boys do to illustrate the plot: Cap just isn't getting it.

Even George and Harold seem distracted. They're so delighted by the squeaky sound of the marker that it takes their explanation on a mini tangent. Once they're done, Captain Underpants thinks they want him to get inside the can, which he gamely attempts to do. It takes seven hours and many more markers to get through to the caped crusader, but he gets it eventually. Kind of.

Once he figures it out, Captain Underpants flies off to the school and sneaks in through the window. Then he has to perform some "acro-ba-tastics" to get through the lasers, squeezing himself through the dense maze of lights and peppering in a few good flips until he finally arrives at the pedestal that holds the Suck-a-trash.

"I know exactly what to do!" Captain Underpants announces. But it becomes clear that he doesn't actually know. It's too easy to confuse the much-sought-after device with the normal can, because the only thing that distinguishes them is the bright red button on top of the Suck-a-trash. Instead of switching them, he just takes both. Then he gets confused and puts them back on the pedestal, before grabbing both yet again and flying off.

As Captain Underpants goes, the office explodes behind him. Though he returns triumphantly to George and Harold, they're frustrated by his mistake. This is definitely going to cause some trouble with Cyborg Melvin, though the clip ends before the fallout can commence. It also doesn't explain exactly why the boys are after the Suck-a-trash 2000 or even what it is. But that's why you tune in for the entire episode! Fans will be eager to find out how George and Harold get out of this one, though it may be more difficult to do so than usual. Now that cyborgs are involved, all bets are off.