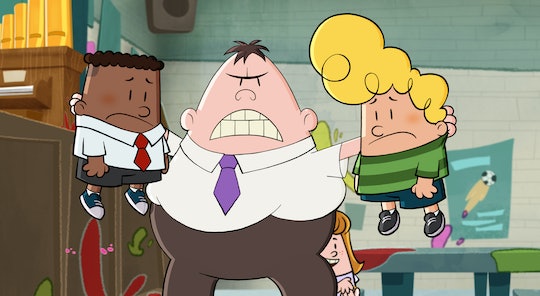 'Captain Underpants' Pays Homage To 'Inside Out' In This Exclusive Clip

When The Epic Tales of Captain Underpants Season 3 premieres on Netflix on Jul. 19, George and Harold will be in an all new setting — but dealing with the same problems. The kids of Captain Underpants go to summer camp, but this exclusive clip reveals that it's hardly everything they'd been hoping for. And that's all because of Mr. Krupp, who is always out to ruin a kid's good time.

Any camp run by Mr. Krupp would be a nightmare, because he's clearly in the wrong line of work. He should probably stop taking jobs that force him to be around children, for the good of all involved. But Harold and George are prepared for his shenanigans and they've decided to combat his ill intentions with a touch of blackmail. All for a good cause, right?

The clip opens with George and Harold bursting into Mr. Krupp's cabin, followed by a gust of wind that whips Mr. Krupp's shirt off. "This camp is all bad!" George announces before demanding, "We want a camp that's all good!" But first, Harold clarifies, they would like Mr. Krupp to put his shirt on. He's trying, but there is an inexplicable tornado in his room that keeps it just out of reach.

Ultimately, George and Harold have bigger fish to fry than strange weather patterns inside cabins. They want to know whether or not Mr. Krupp is going to come through and turn this camp into the camp of their dreams. The problem is, Mr. Krupp already thinks the place is perfect. It has air and bugs and dirt. What more could you want? It's a very apt read of summer camps in general, if I do say so myself.

But the boys must have had their expectations raised by one too many fun summer camp movies. To a tune reminiscent of "I Am the Very Model of a Modern Major General," the famous patter song from The Pirates of Penzance, they list all the things they're looking for from camp. And it's a doozy of a list: swimming, fishing, water skiing, volleyball, boomerangs, paintball, baseball, sailing, horseshoes, diving off of overhangs, archery, kayaking, barbecue, dominos, laser tag, capture the flag, a pie eating contest, and a talent show. Is this sleepaway camp or a five star resort? Dial it back, kids.

Mr. Krupp outright refuses to meet their demands, but Harold and George are ready for that. If he doesn't give in, they're going to blare air horns nonstop and prevent him from catching a wink of sleep. The clip then jumps inside Mr. Krupp's mind, where a collection of Inside Out-style emotion Krupps debate the best way to get the boys to pipe down without giving them every last thing on their list.

Happy Krupp suggests something nightmarish called a Smile-a-thon, while Hungry Krupp is all for a pie eating contest. Weepy Krupp just wants a good cry. But Sneaky Krupp might have a plan. He suggests implementing arts and crafts, then selling whatever the kids make for a tidy profit. I'm not sure how much lanyards and popsicle stick frames sell for, but I suppose it's worth a shot. Krupp loves it.

Harold and George may have to call on their old pal Captain Underpants to thwart Krupp's latest devious plot and get the summer camp experience they truly want.