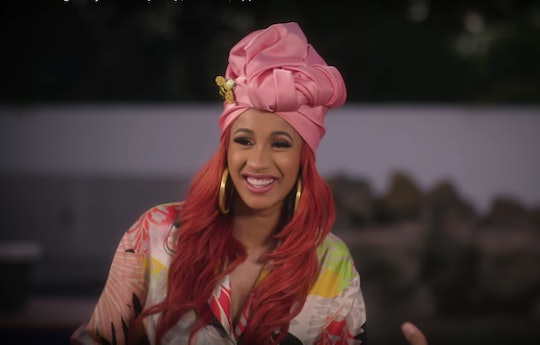 Cardi B Answered Pregnancy Rumors By Dropping Even More Hints, & Fans Are Reeling

One main criticism around fan culture is people’s expectations to know everything. There’s a level of entitlement to celebrities and their personal lives that’s unmatched; some say they signed up for it, but Cardi B is pushing back against that expectation. Recently, Cardi B answered pregnancy rumors by dropping hints, and fans were reeling.

Reports of Offset cheating has lead to increased speculation on the nature of Cardi B's relationship. Rumors about Cardi Bi's pregnancy have been increasingly rampant since her engagement to Offset in October 2017, as fans struggled to understand why the couple was still together. In response, Cardi B addressed the Offset cheating rumors in her song "Be Careful," so maybe fans should have seen this next one coming.

While speaking with Beats 1’s Ebro Darden on Apple Music, Cardi B finally took time to address ongoing pregnancy rumors, but it wasn’t the straight yes or no answer fans wanted.

“I feel like people just got to tune in a little bit on my album and they will know a little bit more because I can’t address all the rumors and everything,” Cardi B said, referencing her aptly named debut album Invasion of Privacy, released on Friday.

Back in February, TMZ claimed Cardi B was telling members of her team she was pregnant. Theories began to pop up across the internet, with fans even honing in on a picture of Cardi B performing, claiming she had a visible baby bump.

"Is there maybe a Kylie Jenner secret that we need to know about lol just asking," one person wrote on an Instagram video of Cardi B dancing to an upcoming track.

Cardi responded, "No b*tch I'm just getting fat. Let me fat in peace."

But not even that response could stop the rumors.

And while Cardi B's suggestion that fans tune into her album wasn't a definite yes or no, many are still speculating she's pregnant. Some have even gone farther, suggesting that one of her songs, "Money Bag," is about being pregnant with twins.

In the chorus of "Money Bag," the lyrics say:

I said 'Bae, it's a snack,' he said it's a entrée. With them pretty ass twins, you look like Beyoncé.

It's well known that Beyonce recently gave birth to twins, Sir and Rumi Carter. And if you give fans a bone, they'll definitely run with it.

However fans speculate, it's clear that Cardi B has no more plans to weigh in on the subject.

“I have been so open to people about myself,” she continued in her Beats 1 interview:

People cannot expect me to be open about everything. Certain things to me, it has to be private. You cannot invade my privacy. I’m not a damn animal at the zoo that you could just see everything. No! People just will find out more. If it arrives and if it don’t arrive, then you gonna know what the f*ck is goin’ on.

So, take a cue from the artist herself. If it happens, it happens; if it doesn't, it doesn't. In the meantime, listen to her album Invasion of Privacy.

More Like This
Solange Knowles Is Making History In The New York City Ballet
Kristin Bell Shared Some Sweet, Rare Photos Of Her Daughters From A Family Vacation
Adrienne Bailon & Israel Houghton Welcome A Baby Boy Via Surrogate
Princess Charlotte Had A "Lovely" 7th Birthday, According To Her Parents