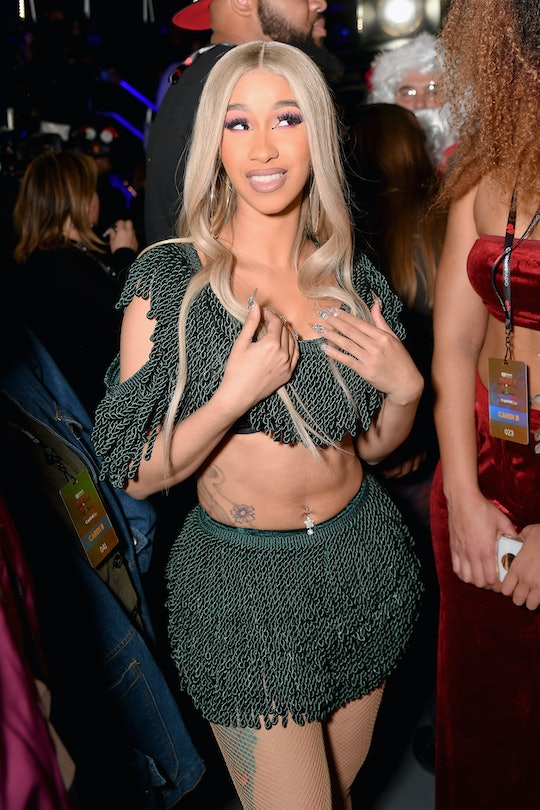 All new moms probably agree that a fundamental staple of every baby wardrobe is tons of soft, adorable pajamas from Target, and your favorite rapper would have to agree. In an interview with People, Cardi B said she can't dress her daughter in designer clothes, because she just throws up all over them. TBH, it's a surprisingly relatable struggle.

Though most moms (and uh, people) won't ever know what it's like to have a wardrobe packed with the most exclusive designer goods around, but such is already the life of Kulture Kiari, Cardi's 6-month-old daughter. However, Kulture isn't quite at the point where she's ready to appreciate the stellar clothes her mom gives her, because right now, she's more interested in, well, probably anything else.

In a recent interview with People, Cardi opened up about how she had to accept that a designer wardrobe just wasn't going to be practical with a little baby. “She has so much name brands, and she just throws up in all of them,” the 26-year-old rapper joked. “She always ends up in Target pajamas... I look at every video and pictures and she got Target pajamas because by the time I take a picture… very pretty, expensive clothes, she throws up on it, she sh*ts on it, she drools all over it... Things never go as you plan.”

However, simply buying and wearing the most amazing clothing might not be enough for Cardi and Offset's first daughter. In fact, The Blast recently reported that just after she was born last July, they trademarked her name for the merchandising of "shirts, sweaters, jackets, pants, skirts and footwear."

According to The Blast, the parents were reportedly trying to secure the use of her name for not only clothing, but also “musical recordings, motion pictures, entertainment marketing services” and promotion for recording and performing artists, as well as “online video games, dance events by a recording artist and fan clubs.”

It's clear they are trying to make sure their daughter is set up to pursue a career in fashion, film or music, if she wants. Who knows, maybe a Target line of her own could be in the future. It's possible, considering not only her parents' status, but the overall amazing style with which she's being raised.

Despite throw up fears, Cardi still dresses her daughter to the nines, as Page Six previously reported. In fact, she's even posted Instagrams of her daughter in a $830 Versace barocco print baby puffer onesie, and last summer, PAPER revealed that Kulture was being toted around in a custom made designer stroller, complete with gold wings.

Though Cardi is probably happy to be able to provide for her daughter, she told Harper's Bazaar in an interview released today that what she really wants is peace and quiet.

“I feel like my life is a fairy tale and I’m a princess — rags to riches, people trying to sabotage,” she told the magazine. “Before, I cared about everything — relationship, gossip. Now I don’t feel like I have the time to please people... I don’t care about anything anymore — just my career and my kid.” She aded, “Well, I care about my career because of my money."

Though she and Offset haven't been together for a while, People reported that recently, she mentioned considering having a second child with him. “I want a second child, but I got so much things to do first. It’s like, I want to learn more, you know?” she told the publication. “It’s not that easy to have a child, so you just want to learn more and more and the process and wait 'til they get a little bit bigger.”

Ultimately, Cardi is killing it as a mom, whether her baby girl is in designer duds or Target PJs. Sounds like the best of both worlds, even if there is some throw up.