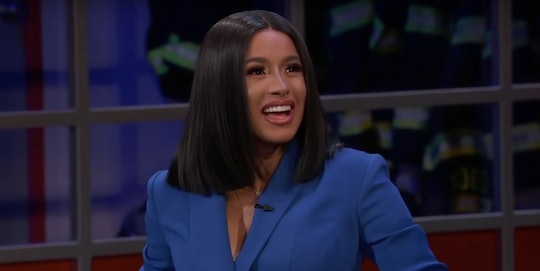 Being a parent is hard — that much you hear about often. But becoming a parent? That's hard, too, and between fertility struggles, the rawness of actual childbirth, and what it takes to recover in the aftermath is often eclipsed by the joy and excitement of welcoming a new little person into your family. But new mom Cardi B got candid about childbirth being "harder" than she expected in a new interview, and she was sure to mention that though her daughter has completed her life, it was definitely more challenging than she anticipated.

On Wednesday, Cardi B appeared on Jimmy Kimmel Live! to talk about what it's like to be a parent to her 4-month-old daughter Kulture Kiari, whom she shares with her husband, Offset.

“It was totally harder,” she began. “She broke my vagina.”

Kimmel replied, “That’s a rude thing for her to do. I was always worried about falling on stepping on a crack and breaking my mother’s back.”

Cardi responded, “Why nobody tells you about those things? Nobody told me they were gonna stitch my vagina... People just be like, ‘Oh, you know, when you give birth, it’s gonna hurt.’ But nobody tells you [that].”

Though she phrased it in a really funny way (and TBH, what else would we ever expect from Cardi B?), she does make a pretty good point: childbirth is more difficult than people let on.

But as far as actually being a mom? Cardi was sure to mention that she's blissed out with her daughter, and that her only regret was that she didn't have her a long time ago. “Yes, I am enjoying it. It’s the best,” she told Kimmel. “It’s like, ‘Oh my gosh, I should have had you when I was a teenager. This is what I was missing my whole life? I love you.'"

However, raising a child of two music stars, especially when their entire family is so in the spotlight, doesn't come without its own set of unique challenges.

“There’s certain things that I want to do with my daughter. Like, I want to go to the beach with my baby, I want to take a stroll down the street with my baby,” Cardi explained to Kimmel in the same interview. "And I can’t because I don’t know who’s next to me and who has certain intentions. I don’t wanna show my baby out to the public right now. I just want to protect her. I’m not mentally ready. So paparazzi be everywhere.”

This is not the first time that Cardi has been transparent about not only the struggles of childbirth, but why she kept her pregnancy — and daughter — as much out of the spotlight as possible. (To date, Cardi has still not posted a photo of her daughter on social media.)

Right after Cardi gave birth back in July, she had to cancel her tour with Bruno Mars, according to SPIN, (which would have been taking place right now) on account of needing more time to recover. (Which, by the way, is extremely valid.)

I thought that after giving birth to my daughter that 6 weeks would be enough for me to recover mentally and physically. I also thought that I'd be able to bring her with me on tour, but I think I underestimated this whole mommy thing. Not only am I just not ready physically, I'm not ready to leave my baby behind since the doctors explained it's not healthy for her to be on the road. Thank you Bruno for being so supportive and understanding.

All in all, Cardi is finding her way and learning to balance motherhood and her career, just like any one of us. But nobody can deny that she's not doing it in her own hilarious and honest style.