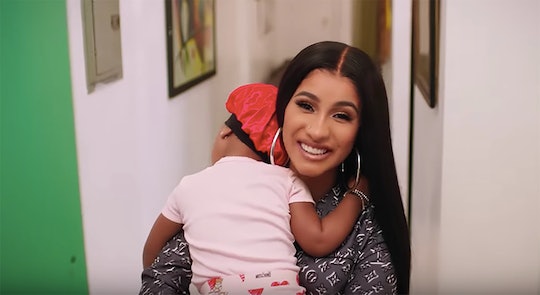 When answering Vogue's "73 Questions" Tuesday, Cardi B shared her hopes for baby Kulture's future. And although the little girl is only 1-year-old, the rapper has big ambitions for her offspring, especially where it concerns her career.

In case you're not already familiar with "73 Questions," it involves a celebrity answering random questions about their life from the comfort of their own home. Cardi B was the perfect candidate for this exercise, in my opinion, because she's extremely honest and doesn't hold back on any topic.

As for this particular interview, the footage began with the "I Like It" singer answering the door of her grandma's Bronx apartment with Kulture in tow, who happened to be sleeping at the time. Considering the baby was front and center at the conversation's start, it makes sense the interviewer opened with questions about motherhood.

“People think that it’s easy. It’s hard. We deserve more Mother’s Days,” Cardi B said on the topic of why motherhood is difficult, while mentioning how she's "never on time" now that she's a parent.

Yep, I have a feeling fellow parents can relate to all of the above.

The conversation then took an especially empowering turn when Cardi B was asked about her hopes for Kulture's future. “I wish for her to be a successful businesswoman,” she explained while cradling a snoozing Kulture, according to TooFab. “An independent woman, a confident woman.”

Cardi B, who married Kulture's dad, rapper Offset, in September 2017, kept this sentiment going when sharing a lesson she'd like to impart on her daughter. "Don't worry about what people say, and to dream big and follow it," she said, to which I say, heck yes.

It's possible Cardi B's lesson for Kulture was inspired by her own experiences with backlash, as the negative chatter hasn't died down even though she's now a mom. “It’s still has been the same. People still talk about me like if I don’t have a kid," she said about enduring her haters, according to People. "But, I know I’m a different person now, so whatever.”

And luckily for Cardi B, she has a great team behind her to get past those difficult times. Offset, for example, had the sweetest thing to say about the rapper as a mom, telling Vogue about her best habit, "Her best habit is raising Kulture. She's a good mom. She's doing a great job."

He continued, "A habit with that habit is she like to dress Kulture and do her hair every day. Pick out an outfit, take pictures with her, and do her hair. I love it."

It's clear Kulture is surrounded by a lot of love, and it's awesome her mom has such high hopes for her future. Go get 'em, girl.