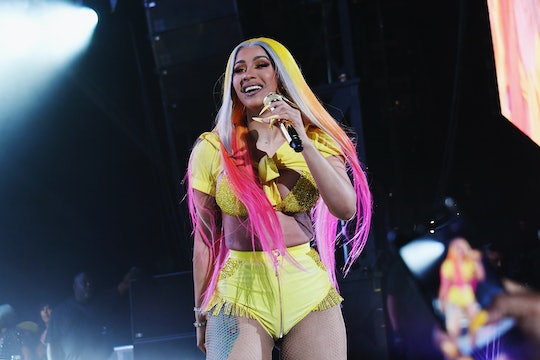 Cardi B's Daughter Has MOVES While Dancing To "Baby Shark"

No one can resist Baby Shark. Just reading the words will have you humming the song for hours. It's been around since 2015 and, fortunately for toddlers everywhere, has no plans on going away anytime soon. Case in point, the happy dance that baby Kulture did while listening to the viral tune. But there's one fact that makes this Instagram video even more smile-inducing. Cardi B.'s daughter dancing to "Baby Shark" shows she has her mom's moves.

In the video, one-year-old Kulture can be seen kicking her legs and waving her arms along to the Baby Shark song as she sat in her pink bouncer. And she's all smiles as her cousin gives her a shower of kisses in between moves. But it's the hip shake at the end that really makes her moves just like mama's.

"Crazy how God not only gives you a kid that looks like you but with the same energy and personality. I saw my cousin posted this earlier and I thought it was too funny. My baby is naturally hype, slick, and funny. And, okay, yeah, a little attitude too but I'm putting that part on her dad part."

Not surprisingly, her dancing inspired some lovable comments from fans and friends alike.

One fan wrote, "This baby girl is literally THE cutest and is a whole MOOD! I love it! #shegetitfromhermama"

Another had a recommendation for Cardi's next track with, "You should definitely add baby shark to your next single and have her be a back up dancer she is readyyyy."

But mostly, fans just can't get over the similarities between mom and baby.

"Sweet lil soul is a replica of you and offset ! THIS IS WHAT MAKING LOVE LOOKS LIKE," said one poster.

Cardi and her rapper husband, Offset, welcomed their baby daughter in July of last year. And her one year birthday party, held just a few weeks ago during the New York City blackout, was an event to remember, according to the rapper. In an Instagram post, Cardi talked about what it was like to keep the party going for Kulture despite a lack of power:

When we got the power...turned the music and some lights on, it got lit again. But with no air conditioner. So we was literally melting, but people were still dancing, having fun. And then the lights came completely back on. But then they came right back off when we was about to cut the cake. And then they cut the lights back on and nobody wanted to leave. And it's 'cause of ya'll and it was such a fun party. Thank you so much.

The blackout might have made for a memorable party, but guest will always remember Cardi B's gift to her daughter — a custom made diamond necklace, according to E! News.

Fans are going to have a lot of fun watching baby Kulture grow up with parents Cardi B. and Offset by her side. And, there's a good chance she'll follow after her mom in more ways that just dancing. Only time will tell.