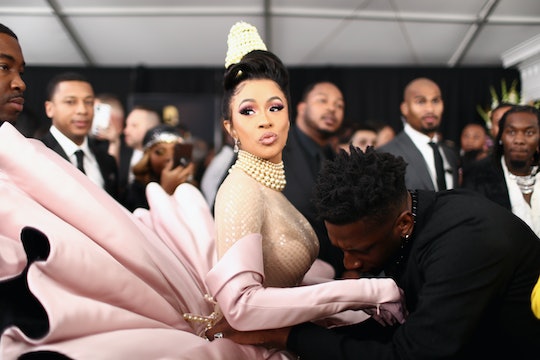 When it comes to rap stars and their famous babes, there's almost nothing that gets us as pumped as seeing a perfect family photo. Though many celebrities are justifiably private when it comes to their kids, once in a while, they bless us with an update, and Sunday was no exception. Cardi B's first family photo with Kulture & partner Offset shows the trio on vacation, and it is perfect.

Since Cardi B gave birth to her daughter last July, she has made a distinct effort to keep her off of her social media pages. Though she documented her pregnancy and postpartum life in a very funny, Cardi way, she was pretty strict when it came to sharing pictures of her little girl. However, that all changed this past December, CNN reported, when she uploaded the very first image of Kulture's face (as opposed to her feet, the back of her head, or the side of her stroller). The upload came right after she and husband Offset allegedly split, though Cardi told Entertainment Tonight that the couple is trying to work things out, but that they're "taking it slow." Whether they've since worked things out, they at the very least seem to be on good terms again.

Need some proof? Cardi just uploaded the very first photo of herself, Offest and Kulture together, and it could not be more perfect.

In the shot, which Cardi noted in the caption was taken back when Kulture was 3 months old, features the couple and their daughter on vacation in Punta Cana, Us Weekly reported.

In the photo, Cardi is seen sitting on the side of a couch wearing a bathing suit and white straw hat. She's holding her hand out toward her daughter, who is laying down in her father's arms. Offset is the only one looking right at the camera, with Kulture resting on his arm, and his hand draped on Cardi's lap. It is such a sweet moment, in which the family seems to be relaxing and truly enjoying one another's company.

Fans immediately started commenting saying congratulations to Cardi, reminding her how beautiful her daughter is, and calling the trio "family goals." (I cannot disagree.)

It's also a particularly special moment given how infrequently Cardi posts about this part of her life, which she had previously explained was due to the relentless criticism and judgment that many moms are way too inclined to experience when they're a public figure, or work in the public eye.

Back when she was just pregnant, The Cut reported that Cardi explained why she held off trying to share the news for as long as she could. After she announced her pregnancy, she dealt with an onslaught of followers saying that she's "ruined her career," and other negative things.

"This is why i did not wanted to say nothing," Cardi wrote on her Instagram story, the magazine reported. "People be so thirsty to scrutinize and try to destroy something that itsuppose to be a blessing."

Previously, while she was still trying to make the world think that she wasn't expecting, Glamour reported that she responded to a comment asking if she had a "Kylie Jenner situation on her hands" (AKA, a secret pregnancy) by saying the following: "No b*tch I'm just getting fat. Let me fat in peace."

Regardless, it's so clear that Cardi loves being a mom, and loves what her life is like with her new daughter. Though it's completely understandable that she'd remain highly selective of what — if anything — gets posted of Kulture online, it's such a treat when she does decide to grace our feeds with some snaps of that adorable baby.