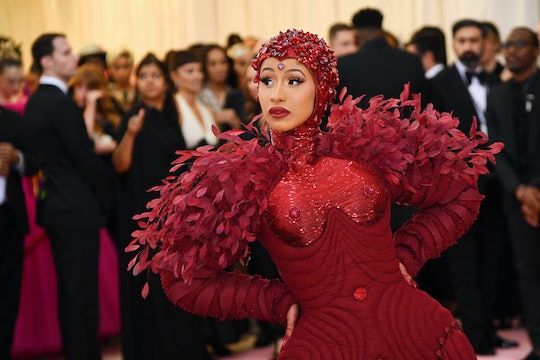 Cardi B's Look At The 2019 Met Gala Was Beyond Words

Better late than never! Cardi B might have been one of the last big names to arrive at the Met Gala, but her outfit for the evening made the wait worth it. Cardi B's look at the 2019 Met Gala was beyond words, and that's just putting it lightly. The oxblood gown was gem-encrusted and designed by Thom Browne, according to Vogue. As if that weren't enough, Cardi was covered from head-to-toe in fabric, with an intricate headpiece and a train that took a handful of handlers to properly lay out for photos.

Speaking of photos, sharing only one of Cardi's look just doesn't do it the justice it deserves. From the gems to the feathers to the train, Cardi B's gown deserved to be seen from every angle possible. Yet somehow, even after carefully eyeing all of the photos I could find of Cardi B's arrival at the Met Gala, I still feel like I need more.

As Vogue pointed out, this was Cardi B's second Met Gala. She did not disappoint. Below you can see full looks at the front and back of Cardi B's stunning ensemble.

If upon seeing the photos of Cardi's gown made you wonder exactly how long her train was, you're in luck. Vogue reports that the train extends out approximately ten feet, adding that it was stuffed with down. Yes, like a comforter.

While many people were a bit confused about what the "camp" theme of the 2019 Met Gala meant, it seemed clear that Cardi knew exactly what to do. As CR Fashion Book reported, the theme was based off of an essay written by Susan Sontag in 1964. Unfortunately there doesn't seem to be an easy way to explain the Met Gala theme, but Andrew Bolton, a curator of the Met's Costume Institute, did it best.

"I think most red carpet is actually camp, it’s about performance, it’s about presenting a more exaggerated side of yourself," Bolton said in an interview, as reported by NBC News.

Just about everything when it comes to Cardi B seems exaggerated, and that is what makes her such an exciting performer. Given that she has nailed the whole "exaggeration" thing, it is not surprising that Cardi B would have one of the most scene stealing moments at the Met Gala.

What is even more interesting about Cardi B's appearance at the 2019 Met Gala is that she kept it completely under wraps. She didn't so much as tease her attendance on social media, leaving her Instagram feed and story totally untouched the day of.

Unfortunately for fans, there are some very strict rules that may prevent Cardi B and other notable celebs from sharing any inside content. Though the rules are unwritten, it is said that "no cellphones" and "no selfies" are two of the biggest ones, as Pure Wow reported. Obviously these rules have been broken in the past (see: Kendall Jenner's selfie from inside the 2017 Met Gala), many celebs might be scared to risk losing an invite back to the big event in future years.

Whether or not Cardi decides to break the rules, we hope she's having the most wonderful time in that stunning gown.