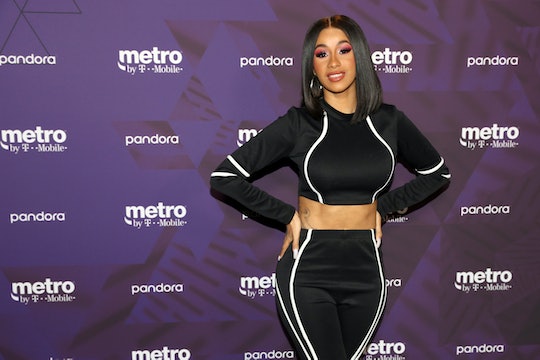 Rapper Cardi B is one fierce mama. After giving birth to her 9-month-old daughter, Kulture, in July, she has been incredibly protective over the privacy of her little one. So, when Cardi B does talk or give updates about her, it's something that people should want to pay attention to. And Cardi B's newest update on Kulture might be the sweetest yet.

In a new interview with E! News, Cardi B revealed that Kulture has developed quite the personality for herself, which sounds like she's definitely taking after the rapper. Since Cardi B is known for her bright personality, according to NPR, Kulture should consider this a blessing.

"She is so fun, she is cool, like, I love her, she's like my little best friend," Cardi B said. "She just makes the gloomiest days like sunshine. I love it. It's a slice of heaven."

It's been nine months since Cardi B and her rapper husband, Offset, welcomed their daughter into the world last July — and clearly Kulture has grown up so much since then. But, fans don't know too much about the little girl since Cardi B is adamant that Kulture maintains a level of privacy, according to People.

Luckily, Cardi B didn't shy away from talking about her daughter over the weekend, opening up to E! News about the challenges of being a working mom.

"You're scared to get a nanny, because you don't want anybody around them," she said. "You cannot just travel with your baby all the time, like, they get sick."

She has a point. Just weeks after she gave birth to Kulture, Cardi B told fans in an Instagram Live video that she didn't want to hire a nanny because she wanted to spend every second with her daughter, according to People.

And during an appearance at Beautycon Festival NYC last week, according to Entertainment Tonight, she admitted that she is still struggling between working and raising her daughter.

"It's very hard," she said. "It's like the hardest challenge ever. I don't even like talking about it."

"When I was pregnant, I used to be like, it's gonna be easy. I'm going to hire a nanny and my baby's gonna come with me everywhere," she added. "But it's like once you have the baby, it's hard to get a nanny, because you don't trust nobody with your kid!"

Cardi B has every right to feel this struggle — she's one very hardworking mama. She made a guest appearance at Coachella this weekend, as Mashable noted, all while getting ready to film her new movie, Hustlers, and recording her second album, which is due out sometime later this year, according to Variety. And she's doing this all while taking care of Kulture.

It's hard to argue with that. Based on this update about Kulture and everything that she has said about her recently, it sounds like Cardi B is doing an excellent job with her mini-me.