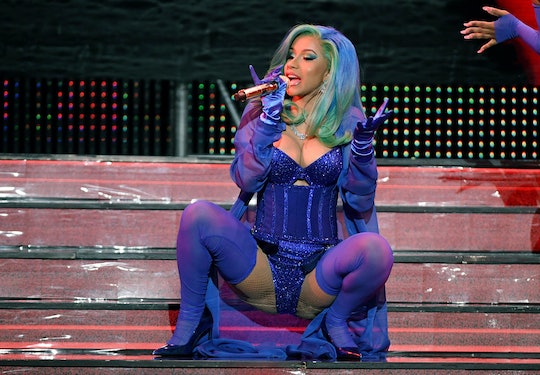 Cardi B did not perform during the Super Bowl halftime show, but she should have — because she still managed to steal the show. Instead, Cardi B appeared in a commercial for Pepsi where people paid attention to everything about her, including her nails. And Cardi B's Pepsi nails were worth paying attention to — they were incredible.

So many people wished that the singer could have been on stage during the show with Maroon 5, performing their hit song "Girls Like You" together. But she did not show up (much to their dismay). Instead, she showed up during the commercial breaks in the Super Bowl (which is the second best part of the biggest night in football) in one of the most hilarious commercials of the night.

The ad, which starred the hilarious Steve Carrell, rapper Lil' John, and Cardi B herself, highlighted the importance of saying "OK" to Pepsi in restaurants. Not only did the commercial give Cardi B a chance to exercise her signature "OKURRRR" catch phrase but it also highlighted Cardi B's brilliant fashion sense.

But it wasn't easy to look that amazing. It reportedly took a lot of effort to dress Cardi B from head to toe in the commercial — and every detail mattered, according to Refinery29. Including the nails.

I suggested that she do three colors to match the Pepsi can. I actually tried to create the Pepsi logo with crystals, but Cardi said no, because she didn't want to give away that she was doing a Pepsi commercial.

But this wasn't your average manicure session. Bui told Refinery 29 that the look took a lot of crystals and time to put together. Bui said:

I used around 25-45 Swarovski crystals on each nail. So, altogether it was hundreds of small crystals. Ultimately, it took two and a half hours to complete.

Not many people can spend two and a half hours on their nails. But, it's worth it to look as amazing as Cardi B does. People on Twitter could not get over how hilarious Cardi B was and how fab she looked.

Cardi B isn't letting her life as a mom to a 6-month-old daughter stop her from showing off her style and taking the time to treat herself. Although some moms might change their style when they become moms or start dressing a little more comfortably, Cardi B has proven that moms don't have to sacrifice their style one bit.

But Cardi's daughter, Kulture, still has a lot to learn from her mom about her own personal sense of style. In November, Cardi B told W that Kulture "has no style." Cardi B said:

My daughter don't have no style right now. She loves to throw up on everything — I'm sorry. My daughter might end up in a Gucci outfit and then the rest of her three outfits — because she wears four different outfits a day — might be from Target. She just throws up on everything.

Whether Cardi B is rocking rhinestone-encrusted nails or getting puked on by her daughter, she still maintains her same great sense of humor and personal style. And that's so true to the rapper herself.