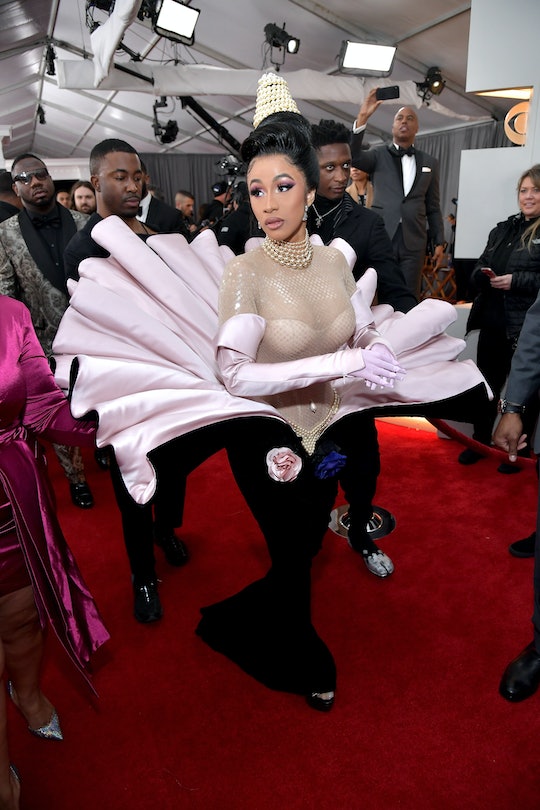 Guys, please stop what you're doing and fawn over Cardi B's red carpet look at the 2019 Grammys with me. The queen arrived at the 61st annual Grammy Awards on Feb. 10 looking jaw-droppingly flawless, okurrr? But, honestly, would you expect anything else from Cardi? Absolutely not.

On Sunday night, Cardi B was nominated for a whopping five Grammy awards, according to the Recording Academy, which included Album of the Year and Best Rap Album for Invasion of Privacy, Record of the Year for her hit song "I Like It," Best Pop Duo/Group Performance for "Girls Like You" with Adam Levine, and Best Rap Performance for "Be Careful." And, there's more: Cardi B also was scheduled to perform at the 2019 Grammys.

So with everything going on for Cardi B that night, an extravagant, glamorous, and over-the-top ensemble was to be expected. Go big or go home, right?

And true to form, Cardi B's Grammys look was something. On Sunday, she wore a form-fitting pink and black gown that blossomed into a flower along her waistline. On her arms, she wore silky pink gloves and two roses were pinned to the front of her dress. And her hair? It was styled in an up-do with pearls nestled within. I mean... wow!

Cardi B's dress wasn't the only notable thing to mention about her 2019 Grammys entrance. In case you missed it, Cardi B also arrived with her seemingly estranged husband Offset on the red carpet with her, as Cosmopolitan reported.

If you need a refresher, according to ELLE, the "I Like It" singer announced last December that she and Offset were separating. "So everybody been bugging me and everything, and you know I’ve been trying to work things out with my baby father for a hot minute now," she said in a video posted on Instagram. "And we’re really good friends and you know, we’re really good business partners — you know he’s always somebody that I went to to talk to, and we got a lot of love for each other but things just haven’t been working out between us for a long time."

“And it’s nobody fault," she went on to say, adding:

It’s just like, I guess we just grew out of love, but we’re not together anymore. I don’t know it might take time to get a divorce, and I’m going to always have a lot of love for him because he is my daughter’s father and yeah.

But on Sunday night at the Grammys, it sure looked like the couple — who share an adorable daughter named Kulture, born in July 2018, according to E! News — were working things out.

With the exception of her date, though, Twitter was obsessed with Cardi B's look on Sunday — if not only for it's meme-able qualities. One person said her gown resembled a "coffee filter," another said it looked like she was wearing "Ferrero Rocher couture." Others, of course, said she looked "iconic," and that's exactly what her looked conveyed at this year's Grammys.