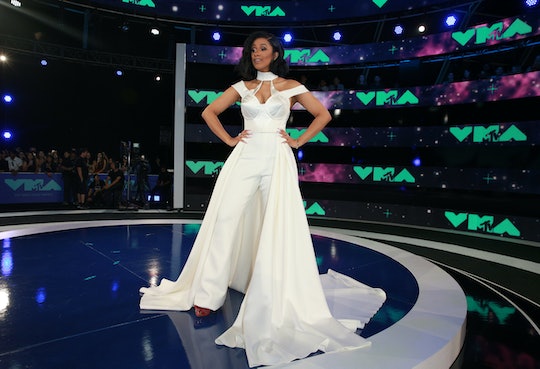 With everything going on in the world, it is rare that anyone stays on topic these days. The same could be said for the 2017 MTV Video Music Awards, where throughout the show, musicians addressed different issues going on in the world. Like, for example, Cardi B's shout out to Colin Kaepernick at the VMAs, which perfectly said everything that needed to be said.

Cardi B took to the stage at the VMAs to introduce a segment of the show. But before she did that, she used her platform for good — she gave a shoutout to NFL star Colin Kaepernick, who one year ago, came under fire for kneeling during the national anthem, and hasn't found an NFL home team since. "Colin Kaepernick, as long as you kneel with us, we're going to be standing for you, baby. That's right, I said it!" Cardi B said during the award show, making a huge statement in just a few seconds' time.

The audience members might have missed her speech or missed the impact of her words, but they're important to note. The timeline of Colin Kaepernick's "controversy" has been really frustrating. In August of last year, Kaepernick refused to stand during the national anthem while it played before an NFL game. Kaepernick said it was to bring awareness to the ongoing oppression and inequality of people of color in the United States.

Now, one year later, Kaepernick is unemployed by the NFL, presumably for his actions and the controversy that standing up for what he believed in caused. Kaepernick was never wrong for kneeling, stating his opinion, or protesting using the biggest platform he had at his availability. Yet, he is being punished for his actions, in spite of the fact that his resume shows he should be hired by a team. Many people believe that Kaepernick is being unfairly treated by the NFL, and judging by her words during the VMAs, Cardi B is one of those people.

Cardi B's words come on the heels of a protest outside of the NFL offices in New York City this past week, with people coming together in support of Kaepernick, demanding that he be signed by the start of the season. Cardi B was also not the only musician in attendance at the VMAs to stand with Kaepernick. On Saturday, during an appearance on ESPN, Chance the Rapper told ESPN SC6 hosts "I might start boycotting all sports unless you guys give my guy what he deserves, which is a chance at his own livelihood, and a podium to speak his mind and speak for people that don't have voices," Noisy reported.

Cardi B and Chance's words say so much about Kaepernick and standing up for something. They should not go unnoticed.