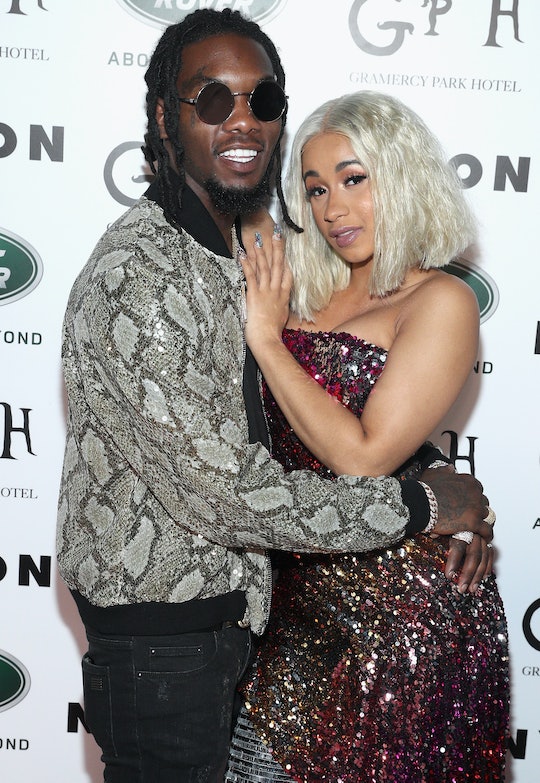 Cardi B and Offset's daughter, Kulture, is only seven months old, but she's already a huge fan of music. This makes sense, obviously, since her mom is a Grammy Award winner and her dad is a rapper. So of course, people are loving Cardi B's video of baby Kulture dancing to Offset's new song — because it is a rare glimpse at Kulture's adorable personality.

When Cardi B gave birth to Kulture in July, she was adamant about maintaining her daughter's privacy and was a little hesitant to share her with the rest of the world, for obvious reasons. The new mom was insistent on keeping her daughter out of the spotlight because she said that "there are too many mean people out there," according to Rollingout. But, the Grammy Award winning rapper has changed her mind (just a bit) since Kulture's birth, sharing bits and pieces of her with the world over the past few months.

And there were absolutely no mean comments when Cardi B posted a new video of Kulture dancing to Offset's song, "Ric Flair Drip" to her Instagram account on Thursday night. In the video, Kulture can be seen smiling and giggling while she dances to her dad's song. The little girl is so sweet, and Cardi B's caption is even sweeter, supporting Offset before he released his new album, Father of 4, on Friday.

"This is one of my favorite songs from my daddy, the other ones you'll hear tonight," Cardi B wrote on Instagram. "Go PAPA Go PAPA."

Really, Cardi B didn't have to worry about any mean comments on Thursday, because people were being so nice about her daughter in the comments of the post.

"She's beautiful and has your personality," one commenter wrote.

"She looks just like you," another commenter noted. "She has the most adorable cheeks."

"Lil mama love her daddy songs," another commenter added — and they're not wrong. Just last month, Cardi B revealed on Twitter that one of Kulture's favorite songs is "Ric Flair Drip" by Offset, which was the same song she was dancing to in the Instagram video.

OK, so Kulture doesn't have that much of a sophisticated taste in music. In the same tweet, Cardi B also revealed that she loves "Baby Shark" — just like every kid her age. Like mother, like daughter.

And Offset is just as big of a fan of his daughter. In the song "Father Of 4" from his newest album with the same name, Offset raps about his desire to protect Kulture from the rest of the world, according to E! News. Offset raps:

Kulture remind me of my grandma, feel like she is closer/Gotta thank your mama, she hold me like holsters/Gotta protect her from the world, can't even post her/If I don't ball, then everything 'round me fall/I'm prayin' to God to watch my kids, that's all

Awwww. You can sense how much love Offset has for his youngest child. And this makes complete sense, especially since, in a new interview with HauteLiving, Offset said that his "kids are his everything."

But just because Kulture appears to have a thing for music and dancing doesn't mean that Offset (or Cardi B) will make her pursue a career in music. Offset told HauteLiving that he won't make his four children (three of which are from previous relationships) do anything they don't want to do.

"My kids are very entertaining," Offset said. "They already entertain everyone around them. I just want them to have a choice — I don't want to force them into anything."

Based on the video it's clear that Kulture might very well be one of the happiest little babies around, and that's all thanks to her rockstar parents.