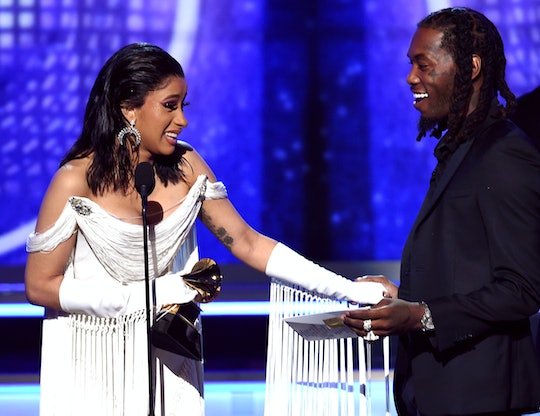 In case you missed the big shebang, Cardi B had a phenomenal night at the 2019 Grammy Awards on Sunday, Feb. 10. Not only was she selected as a live performer during the star-studded event, but she also snagged an award of her own on Sunday as well. As exhilarating as the singer's night undoubtedly was, I'm sure none of it compares to how she felt after she went home to her infant daughter that evening. Because Cardi B's video of Kulture saying "mama" for the first time will give you all the feels.

As People reported, the mom of one took to Instagram (technically) during the early hours of Monday morning to share a special moment with her followers. Although Cardi B had just claimed her first Grammy Award in the best rap album category for Invasion of Privacy, according to ET Online, she was actually posting about something else entirely: Her baby girl. "After a week of only saying papa !She saying mama! Happy 7 months Kulture ! We love you," the rapper captioned a video clip of her daughter. In the video, Kulture can be heard — with her face obscured by a hearts-eyed face emoji, of course — clearly saying "mama." Cardi B, meanwhile, can be heard gasping before turning the camera onto herself. The clip ends with the clearly emotional mom covering her mouth as tears well up in her eyes. (Aww!)

Seriously, though — isn't little Kulture's voice just too precious? Cardi B's video gave her followers all the feels, based on the comments. One Instagram user wrote, "Awee your reaction made me tear up."

Yet another person chimed in with, "Aww! I think the best part of watching your career is seeing how you’re so focused on being with and loving your baby girl. This is so cute!"

Another follower summed it up perfectly, "The best gift you could have ever had. Grammy & mama❤️❤️❤️."

Perhaps Kulture noticed the shout-out from her mama during her acceptance speech just hours before and decided to return the favor. "I want to thank my daughter Kulture... I'm not just saying thank you because she's my daughter. It's because, you know, when I found out I was pregnant, my album was not complete," Cardi B said to the audience, according to Elle. "I had, like, three songs I was for sure having. And then you know how it was: We was like, We have to get this album done so I could shoot these videos while I'm still not showing. And it was very long nights." In addition to thanking the artists who contributed to her album, she thanked her husband, Offset. She continued:

You, husband, thank you. Nah, seriously, 'cause he was like, 'you're going to do this album, girl. We're gonna have this baby, and we're gonna make this album.' And thank you so much, everybody.

I think it's safe to say that Feb. 10, 2019 is a day that Cardi B won't soon forget. Because I mean, come on. How often is it that you win a Grammy Award and then hear that first-ever "mama" from your baby girl on the same day? Congrats again on your big win, Cardi!