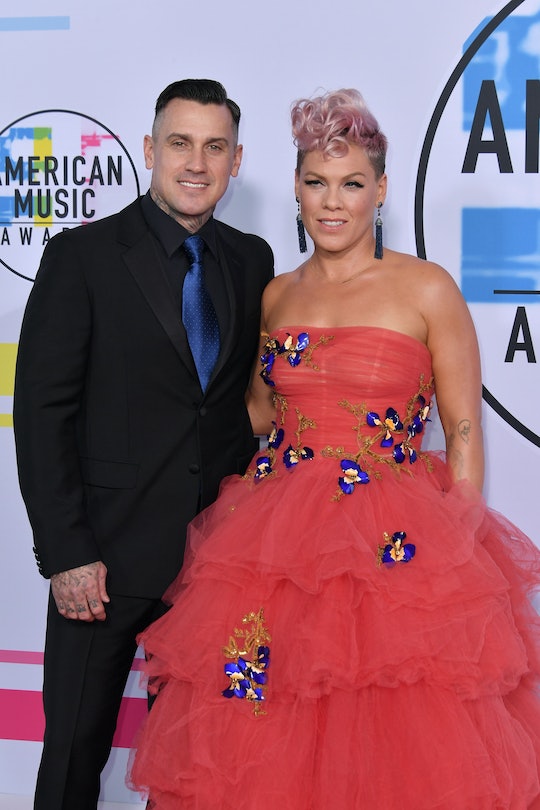 The parent shaming on the internet truly knows no bounds, and when it comes to evaluating celebrity's choices, well, there's one dad that's pretty much had it with followers trying to dissect and judge his decisions. In fact, Pink's husband Carey Hart penned a message to people worried about him letting his son ride a dirt bike with him and it's both concise and refreshing.

On Dec. 10, Hart shared a photo of himself and his son, Jameson, whom he shares with wife Pink. Together, the two were sitting atop a dirt bike. The post contained a number of photos that showed the two playing with Hart's oldest child, daughter Willow, and other friends, riding bikes through a course.

"Awesome day riding motorcycles w/ the family @castillo_ranch," Hart said in the caption. "Jamo is dirt bike crazy, and got to take him on some fun rides. Willow and mama @pink were charging the track. Love days like this!!!!"

However, it didn't take long for followers to express their concerns regarding the safety protocols of dirt bikes, and whether Jameson, who is a year old, should have been on one — helmets and parental involvement or not. "Nice eye protection for the kid," one commenter said. "Your face and body protected but his isn't... umm. Keep on with your bad self. Still love the memories you create for them though..." said another.

However, despite some criticisms, so many people shared nothing but love for the family, with many people suggesting that some of the photos were so good they should absolutely be framed, and others saying they had similar memories of their parents doing outdoor activities with them at young ages.

"Hey people that are being critical — mind your own damn business and take care of your own kids," said one commenter. "Awesome! Bought our five year old his first dirt bike for Christmas! Can’t wait to see him ride with his daddy!" said another.

However, Hart ultimately got the last word. He followed up the post with another one, in which he wrote:

Jamo has his race face on... Don’t worry parent police, I’m a professional.

The Hart family is absolutely not unfamiliar with the trials and tribulations of parenting in the public eye.

In fact, Hart's wife, Pink, has been outspoken about how challenging it is to parent, and how important it is to be transparent about this, and lean on one another for support. In fact, last year, Good Housekeeping reported she shared on Twitter the following about a meaningful fan encounter she had:

A really sweet Mama came up 2 me tonight at the grocery store and told me some nice words about how she gets strength from my parenting cause I’m not afraid to f*ck up in public. We cried together. It’s so hard. Y’all. I wish us mamas could give ourselves and each other a break.

Ultimately, whatever it is the Hart family does, they go all in, they don't apologize, and they're not afraid to keep it real in the process. Goals, if there ever were some.