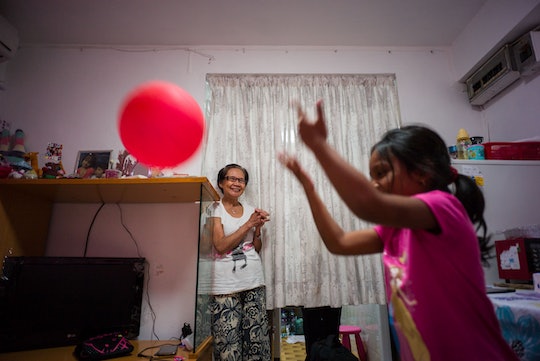 Grandparents Get Health Benefits From Babysitting

Next time you need your parents to babysit, remind them of this helpful little factoid: According to a new study published in Evolution and Human Behavior, grandparents who help care for grandchildren may live longer than their less helpful counterparts. In fact, researchers found that grandparents who help care for grandchildren typically live five years longer than those who don't, according to CBS News.

Seniors without grandchildren of their own reap similar benefits from caring for others' kids, the researchers found, despite being from different families. Even older, childless adults who cared for children typically added an average of three years onto their lifespan.

To study the benefits of caring for grandkids, the researchers looked at nearly two decades' worth of data collected from over 500 Swiss and German seniors, all between the ages of 70 and 103. They controlled for age, physical health, socioeconomic status, and number of offspring, yet still found the link between caring for grandkids and living longer lives.

It's not the first study to have found benefits to caregiving. A study published in Social Science and Medicine earlier this year found that grandmothers who care for grandchildren tend to be in better physical health, and those who watch over their grandkids once a week may have a lower risk of developing Alzheimer's.

Spending time with grandchildren can also boost grandparents' immune systems and make them more active, according to The Telegraph, and there are health benefits even for grandparents who have had past health problems or who struggle with low income. Finally, when grandparents and grandchildren develop strong bonds, both benefit from a lower risk of depression.

Still, the myriad benefits to grandparents (and grandchildren!) doesn't mean parents should be dropping their kids off at Grandma's around the clock: too much involvement can lead to stress or pressure, which is far from beneficial for grandparents. "A moderate level of caregiving involvement does seem to have positive effects on health," lead researcher Ralph Hertwig told CBS News. "But previous studies have shown that more intense involvement causes stress, which has negative effects on physical and mental health."

As more and more studies are proving, however, a moderate amount of child care and involvement is actually great for grandparents — so if you need the occasional babysitter for your tot, don't disregard your own parents. As it turns out, it could be just the thing they need to help keep them young.