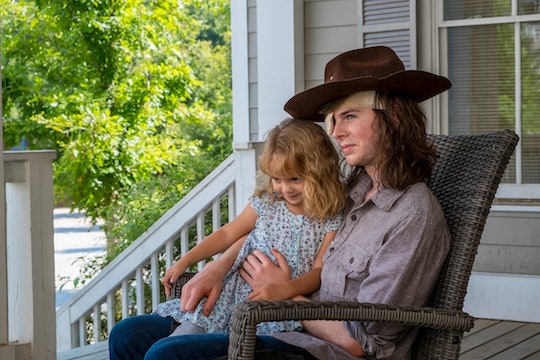 Fans Of 'The Walking Dead' Are Devastated By Carl's Death

At the end of The Walking Dead Season 8 midseason finale, it was revealed that Carl had suffered a bite from a walker and would soon be saying his final goodbyes. Though fans had weeks to come to terms with the news, they still weren't prepared when the show returned with "Honor." Viewers went on Twitter to share just how devastated they were when Carl died on The Walking Dead. It didn't seem like anyone could accept it. Just like Rick and Michonne, fans were reeling.

Many thought that Carl's survival was definite because he represented a hopeful future not just for Rick, but for everyone watching at home. Other characters might come and go, but no one expected Carl to be one of them. It seemed like he would be there until the end, ready to take on the leadership role that Rick had held for so long. Instead, an accident had cost him that future.

In Episode 9, there were flashbacks to the bite itself, which occurred while Carl was helping Siddiq. Carl was shown realizing what happened, coming to terms with his imminent death, and making preparations for the aftermath. That included handwritten letters for everyone who meant something to him, and a series of heartfelt deathbed conversations that would have brought a tear to anyone's eye.

Carl's death was heartbreaking for so many reasons, and not only because his story had seemed far from finished. When the show first started, he was just a little kid, but viewers had seen him grow up before their eyes. Carl changed drastically over eight seasons as he adjusted to the horrors of the new, post-zombie world, growing stronger and more capable with time. It seemed like there was so much more Carl was going to do and that squandered potential was particularly upsetting.

Carl was also one of the few characters left from the very beginning. All the way back in Season 1, Rick had joined up with a handful of people who ended up departing one by one over the years. Every time someone from that group died, it became a little more painful to bid adieu. Carl might have been the toughest death of all, at least going by how distraught the comments on Twitter were.

Some found themselves hoping for a last minute fix that would save Carl, or a twist that might reveal he was actually fine. Perhaps a cure could finally be found, or Michonne could launch into a Marvel Cinematic Universe crossover that would keep Carl going for a little longer! Unfortunately, it was all wishful thinking; as the episode dragged on, Carl became sicker and sicker.

Carl had wisdom to spare at the end of his life. He gave Judith a life lesson about honoring their family and carrying on their legacy, even gifting her with his iconic sheriff's hat. But Carl's most important monologue was delivered to Rick. He wanted Rick to build a better world and return to the person he was before, someone who didn't rely on violence and death to solve every issue. Forgiveness was a tough pill to swallow considering all the terror the Saviors had inflicted on the group, but Carl's last dream was of a happier world.

The midseason premiere finally revealed the source of the Old Man Rick flash forwards. The little snippets of an aging, bearded Rick that had popped up throughout the season were actually Carl's vision of what the world could become. As per the episode's title, Rick had to honor that by trying his best to make that vision a reality — even though he had to do it without Carl.