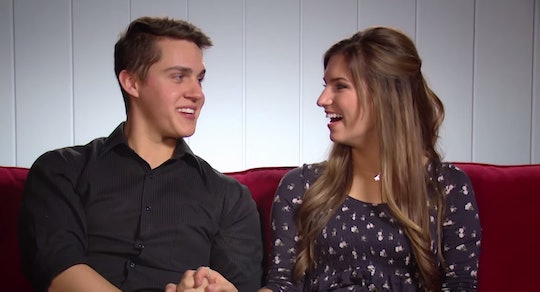 If you're like me, and have an unrelenting desire to keep up with all things related to big families in the South, then you're probably well-acquainted with the Bates family (they're like the Duggars, except they live in Tennessee instead of Arkansas). And my interest is especially piqued these days because more of Gil and Kelly Jo's 19 children are getting married, moving out of the family home, and starting families of their own. If you share in my curiosity, there's a good chance you'll want to take a tour of Carlin Bates Stewart's house. As it turns out, Carlin's house decor is pretty amazing.

As a refresher, Carlin is the ninth child of Gil and Kelly Jo. She and Evan Stewart became engaged in September 2018 and tied the knot on May 25. In typical Bates fashion, it wasn't long before the newlyweds had another exciting announcement: A baby is on the way! Carlin and Evan shared with Romper exclusively on Sept. 4 that they're expecting their first child in February.

In the midst of these life changes, Carlin made the move from rural eastern Tennessee to Nashville to be with Evan. "Evan is currently working as an electrician apprentice, which requires his commitment in Nashville," Carlin told Knox News in June. "He is also very involved in his church and in his family’s singing ministry, which revolve around the Nashville area."

She continued, "I’m super excited about starting a home with him there, but I am also glad it’s still in Tennessee and very close to my family."

Shortly after their wedding, Carlin shared photos of her and her new husband standing in front of what seems to be their home. "Forecast: blue skies and sunshine," she captioned a photo of the newlyweds with their arms wrapped lovingly around each other.

In July, Carlin's Instagram followers got another look at the Stewarts' home — except this time, it was a tour of their finished bedroom. And guys, the decor is to die for. Take a look for yourself.

If you scroll through the images, you'll see a gorgeously finished and perfectly coordinated bedroom featuring a Wayfair bed, a nightstand from Amazon, wall mirrors from Target, and a green accent wall courtesy of Carlin's sister and brother-in-law, Erin and Chad Paine. Beautiful curtains and a lamp from Target can also be spotted in the bedroom. "My dreams will be much sweeter now that my bedroom is finished!" Carlin captioned the post. "I'm obsessed with this look @chad_erinpaine design. Thank you! Thank you!"

Carlin's followers definitely seemed to dig the new look. One Instagram user wrote, "I am swooning! That room is incredible!!!"

Another person declared, "That is gorgeous. @chad_erinpaine and her hubby should have their own HGTV show!"

I don't know about you, but I hope Carlin and Evan share more photos of their home as they continue to get settled. Hopefully, Erin and Chad (who started his own construction company) will help them design more rooms because the Stewarts' bedroom is simply stunning. Perhaps the nursery is next?