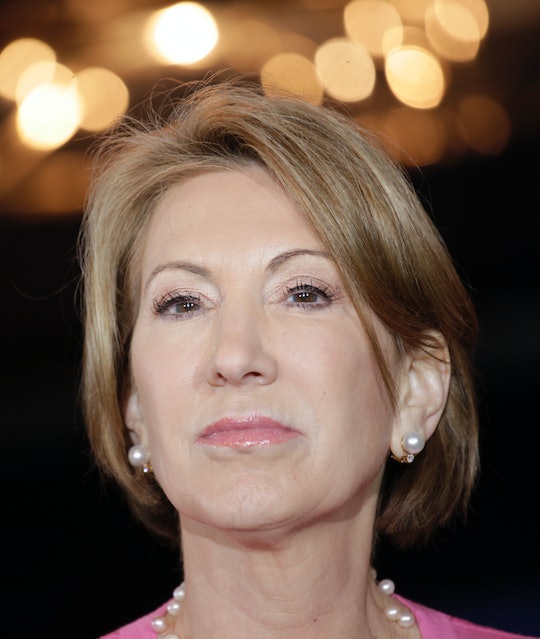 Carly Fiorina Tells Donald Trump To Drop Out, But Will Other Republicans Follow?

Republican nominee Donald Trump is starting to lose some high profile Republican supporters in the wake of his lewd comments about groping and hitting on women. On Saturday, Carly Fiorina told Trump to drop out of the race and let Indiana Gov. Mike Pence take the top of the Republican ticket. She wrote on Facebook, "Donald Trump does not represent me or my party. I understand the responsibility of Republicans to support their nominee. Our nominee has weighty responsibilities as well. Donald Trump has manifestly failed in these responsibilities." After warning again about the danger of voting for Democratic nominee Hillary Clinton, Fiorina concludes that the only thing left to do is get Trump out.

"Today I ask Donald Trump to step aside and for the RNC to replace him with Gov. Mike Pence," she added. Some other Republicans are floating the same idea. New Hampshire Sen. Kelly Ayotte also posted on social media that she would be writing in Pence come election day.

But it's a little too complicated for Trump to back out of the race now for a few reasons. Technically, he can drop out according to Rule 9 of the Republican National Committee and the GOP would have to have another convention and have all of the delegates vote again. Or the 168 members of the RNC could vote, with each member getting a certain amount of votes based on their state's population. So, it's possible. But it's very late when it comes to the state ballot rules.

First of all, early voting has already begun in some states, so they can't just replace him on the ballot. Also, in many states, the deadline for withdrawing due to "death or declination" has passed. West Virginia, for example, says a candidate has to pull out 84 days in advance of the election.

In terms of Trump dropping out, there's also the the man himself to deal with. The failed steak salesman and compulsive kisser told The Wall Street Journal on Saturday that there's "zero chance" he would leave the race. "I never, ever give up. The support I’m getting is unbelievable, because Hillary Clinton is a horribly flawed candidate," Trump added.

So Trump might not be able to be replaced (he really is one of a kind, right?), but writing in Pence is a possible option. Unless Pence himself wants to bail. The vice presidential candidate was reportedly "beside himself" when he heard the 2005 tapes of Trump discussing women. Karen Pence, his wife, was also "furious." Pence was supposed to attend a campaign event in Wisconsin Saturday (Paul Ryan disinvited Trump on Friday) but is no longer going to represent the candidate.

Whatever the RNC decides, it's unlikely that the Clinton campaign is very excited about all of this. It's good if her opponent is going down, but the very nature of elections means that she might now have to pivot and start taking on Pence or someone else. This isn't easy for anyone.

In the coming days, there's bound to be more shakeups around the Trump campaign. It's all about waiting to see how it goes down.