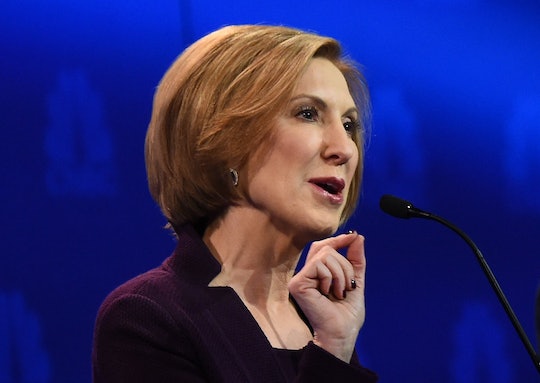 With many GOP presidential candidates’ campaigns in the make it or break it positions, each Commander-In-Chief contender was battling to stand out during the fourth debate tonight. And, as with the past three battle rounds, Carly Fiorina’s closing statement at the debate made it clear she is a legitimate threat to the likes of Donald Trump and Ben Carson. But it also demonstrated that a notably calm and composed Fiorina is, most of all, a serious threat to Hillary Clinton.

With three percent of the vote in the latest national polls of GOP primary voters, Fiorina was tied for sixth place with three competitors going into the night, which was well below her all-time high position as number three in September. But based on her strong oration tonight about needing to take down Clinton — which stood in stark contrast to clumsy closing statements from Jeb Bush and John Kasich — it wouldn’t be surprising to see Fiorina’s poll numbers jump just as they did after the first three debates when the former businesswoman logged memorable nods to Lady Liberty and Lady Justice.

For her closing statement this time around, Fiorina turned her attention Hillary Clinton, yet another theme that seems destined to unite Republicans. (Especially considering the crowd booed earlier in the evening when Clinton’s “impressive resume” was mention by moderator Maria Bartiromo.)

Imagine a Clinton presidency: Our military will continue to deteriorate, our veterans will not be cared for. And, no, Mrs. Clinton, that situation is not exaggerated. The rich will get richer, the poor will get poorer. The middle class will continue to get crushed. And, as bad as that picture is, what’s even worse is that a Clinton presidency will corrode the character of this nation. Why? Because of the Clinton way. Say what you have to, lie as long as you can get away with it. We must beat Hillary Clinton. Carly Fiorina can beat Hillary Clinton. I will beat Hillary Clinton. And under a President Fiorina, we will restore the character of this nation, the security of this nation, the prosperity of this nation because as citizens, we will take our government back.

Going into the night, one big question was whether Fiorina could possibly top her bar-setting “Lady Liberty” speech from the second debate in September. (That was actually her first time on the main stage after getting promoted from the happy hour forum.) Although Fiorina didn’t lean so heavily on patriotic symbols this time, she still stood out by looking past the primaries and into the future of how she would beat Clinton in the general election. Sure, Fiorina was sparse on details in her closing statement about what she would do, but saying “we will take our government back” is sure to become a rallying cry for Republicans — which only means good things for Fiorina.