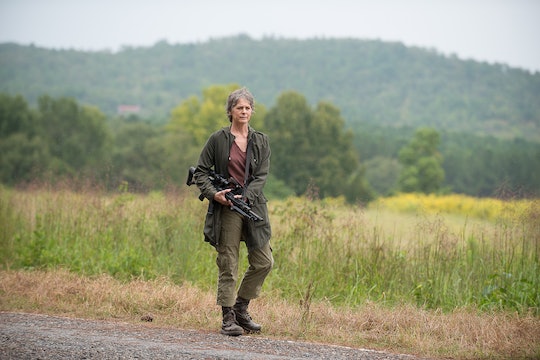 Carol Leaves Alexandria On 'The Walking Dead,' But Will She Be Back?

Carol's journey on The Walking Dead has been one of the most fascinating and finely done in the show's six seasons. She started off as a quiet, abused housewife just trying to survive with her daughter but grew to become one of the toughest and most ruthlessly practical characters on the show. However, in Sunday's episode of The Walking Dead, Carol finally left Alexandria, after her growing doubts finally got the best of her.

Carol's doubts have been a big part of the season so far, with fans wondering anxiously if their favorite badass was losing her hard-earned edge. All of the characters are settling down in Alexandria and finding a routine that has allowed for them to get comfortable and begin building their lives again (this season might have the record for most romances started). Instead of constantly battling for survival, everyone is starting to see a light at the end of the tunnel.

The downside of this is that it might be making them soft and vulnerable to the dangers of the world — just like the Alexandrians were when Rick's crew found them. Carol especially has been battling with doing the things she has to do to survive, and on Sunday she realized she may not be able to do those things anymore. Carol is the woman who killed two sick people at the prison rather than see an outbreak start, but those deaths (two in a long list that Carol keeps in a notebook) have begun to weigh on her.

Carol left Alexandria without telling anyone or giving anyone a chance to stop her, although she does leave behind a note to answer lingering questions. Part of the reason she feels she has to leave Alexandria is because staying means killing. She knows she will have to kill to protect the people there, and, though she's taken more than her fair share of lives, she doesn't want to do that anymore. Now that things have slowed down enough to let her process the person she's become, it seems that Carol doesn't care for that person. This, unfortunately, feels like a permanent departure, although she's always welcome back in our hearts.