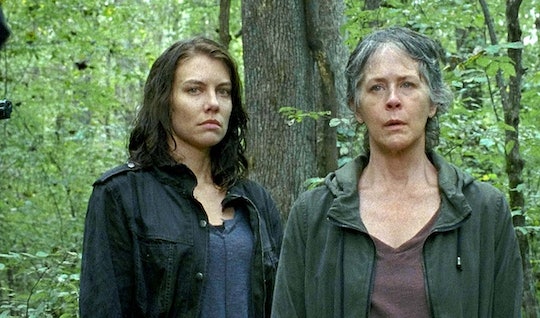 Move over Rick and Daryl. There's a new pair of powerful pals on the The Walking Dead. Following last week's cliffhanging captivity, Carol and Maggie escaped The Saviors on Sunday's episode of The Walking Dead and left a trail of bloody and burnt victims in their wake. Given The Saviors' vicious nature and their ruthless leader Negan, many viewers worried that one of the two leading ladies would lose their life in this week's episode. (Or worse, that we wouldn't find out their fate until the season finale.) But being card carrying members of the BAMF Club, the two not only survived, but slayed.

Unlike most episodes of The Walking Dead, Sunday's episode centered around the new dynamic duo. (Much to the dismay of viewers who hope to see a shirtless Daryl every week, myself included.) Not only did the episode highlight Carol and Maggie as indivudals and as a twosome, but it focussed on female relationships as a whole. There was one particularly feminist moment in the episode, in which Carol and Maggie try to take out the one male Savior after he belittles and beats Paula, the lead female Savior. And though he takes them both out (they are, after all, bound together with duct tape), Paula finishes the job by shooting him down. It's nice to see that even in the throws if a zombie apocalypse, standing alongside your fellow women is a priority.

Although the female Saviors played a large part in tonight's episode, Carol and Maggie truly shined with the strength and sisterly support.

They gave new meaning to the phrase girl power.

They reminded us of their BAMF status.

They slayed (literally and physically).

And that they're the real queens of the apocalypse (well, them and Michonne.)

But the girl power continued behind the scenes as well. Immediately after the episode aired, Melissa McBride appeared on Talking Dead and expressed how happy she was that there was an episode focussing on Carol and Maggie.

"We’ve both waited such long time to be able to work together, and this script and this episode was so beautiful and meaty for the both of us," McBride told Talking Dead host Chris Hardwick. Lauren Cohan echoed McBride's sentiments in a video interview that aired on Talking Dead:

"Working with Melissa in this episode in the depth that we were able to is literally my Walking Dead dream come true. I have wanted to have more story lines for Maggie and Carol since being on the show. On an artistic level, it’s most inspiring experience that I’ve had. And on a story level I love that this craziness has happened and you see the world stop for these tow characters."

Here's hoping for more Carol and Maggie moments in the future. (Caggie? Marol? Eh, we'll work on that.)