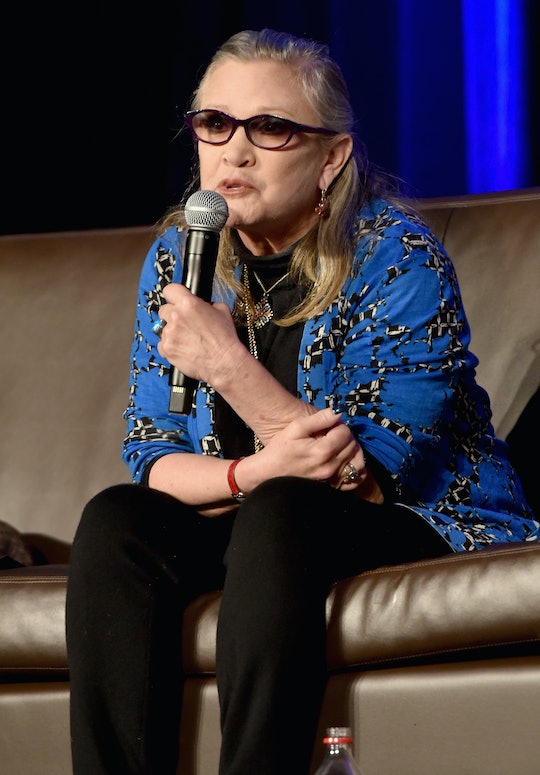 The entertainment, literary, and mental health communities are stunned and saddened by the news that beloved actress, author, and producer Carrie Fisher has passed away at the age of 60. After sustaining a serious heart attack during a flight to Los Angeles, Fisher succumbed to her injuries at 8:55 Tuesday morning. Now more than ever, fans are holding onto Carrie Fisher quotes about mental health. The same quotes that proved she was a profound advocate in the mental health community, are the quotes that are now helping us all cope with this incredible loss.

Fisher was unapologetic about her bipolar disorder, a diagnoses she has openly spoke on for over 10 years. Her honest testimonies and candid conversations about the trials and tribulations of mental illness worked to de-stigmatize a disorder very little know a significant amount about; proving to the world at large that mental illness is nothing to be ashamed of, nothing to apologize for, and nothing to hide. While it took a reported 20 years and two mental breakdowns to get to the point where she would be known as the "poster child of bipolar disorder," Fisher carried the torch of de-stigmatized mental health proudly; never wavering in her honesty.

For example, in an interview with Diane Sawyer on PrimeTime Thursday, Fisher told Sawyer, "I am mentally ill. I can say that. I am not ashamed of that. I survived that, I’m still surviving it, but bring it on. Better me than you." She went on to say, "I have a chemical imbalance that, in its most extreme state, will lead me to a mental hospital," describing her bipolar disorder as a "roar of energy in the brain."

Better me than you.

In March of 2013, Fisher was candid with People about the affects of her mental health diagnoses and how important it was, is, and will always be to ask for support and assistance.

The only lesson for me, or for anybody, is that you have to get help. It’s not a neat illness. It doesn’t go away.

Perhaps one of the most poignant quotes one can turn to regarding mental illness, is Fisher's quote regarding the social stigma. In her book, "Wishful Drinking," Fisher touches on the profound absurdity that is judging and shaming those with mental illnesses, saying:

One of the things that baffles me (and there are quite a few) is how there can be so much lingering stigma with regards to mental illness, specifically bipolar disorder. In my opinion, living with manic depression takes a tremendous amount of balls. ... At times, being bipolar can be an all-consuming challenge, requiring a lot of stamina and even more courage, so if you’re living with this illness and functioning at all, it’s something to be proud of, not ashamed of.

While it's 2016 and this year has been anything but kind, it is truly unbelievable that mental health carries so much social judgment and shame. Still. In a world where we're told to go to the doctor if we break a bone or have a severe cold, we're simultaneously shunned for reaching out for help when our mental health falters. Carrie Fisher, in her undeniable bravery and endearing honesty, worked tirelessly to combat that unnecessary stigma. By being herself, she gave us all silent permission to do the same.

Thank you for the force of your advocacy, Carrie Fisher. It's a force that will be with us, always.

More Like This
The 20 Most Romantic Quotes From Friends
Marie Kondo Gives Up Tidying Post-Kids, Sparking Joy For Moms Everywhere
Freeze! The Single From The New 'Bluey' Album Just Dropped
Keke Palmer Casually Drops Her Baby's Sex On Jimmy Fallon
What Parents Are Talking About — Delivered Straight To Your Inbox