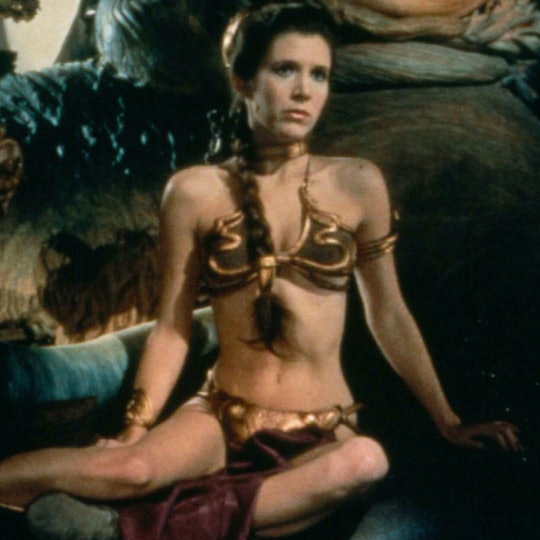 If Princess Leia is the toughest woman in the galaxy, it’s all because Carrie Fisher is behind her. This week, the actress spoke out about the controversy surrounding her Princess Leia slave bikini, calling it "stupid." With Stars Wars: The Force Awakens opening on Dec. 18, merchandise — old and new — is flooding toy stores, and some parents are unhappy with a Hasbro-made Princess Leia Black Series action figure.

The toy, which dresses Leia in her infamous "slave outfit" of a metal bikini and chain around her neck, has caused quite the controversy. One father even called his local Fox affiliate, complaining that the Princess Leia doll’s outfit was too skimpy for his kids. “That’s pretty inappropriate," Fred Hill told the new outlet. "I got two daughters I don't need seeing that crap. They're like ‘dad why does this doll have a chain around its neck?’. I don't have any answers.”

But Fisher has the perfect answer for curious children. When asked by The Wall Street Journal about the controversial costume, Fisher suggested parents be honest about Princess Leia's "slave outfit."

“Tell them that a giant slug captured me and forced me to wear that stupid outfit, and then I killed him because I didn’t like it. And then I took it off. Backstage.”

She also said that the calls for her action figures to be more clothed is silly. “I think that’s stupid,” she says. Of course, we woouldn't exploit anything less from the franchises's biggest badass. Fisher is known for speaking her mind, especially when it comes to controversial topics. From body image to mental health, here are five other times Fisher gave fans a Chewbacca-sizes dose of bluntness.

Fisher has never shied away from discussing her battle with depression and other mental health issues, making the topic less taboo. "The only lesson for me, or anybody, is that you have to get help," she told People magazine. "It's not a neat illness. It doesn't go away. I'm just lucky this hasn't happened more. [In the future] I don't know if there are setbacks or steps forward. I'm not embarrassed.

He told me later that I had turned him gay... by taking codeine again. And I said, 'You know, I never read that warning on the label'. I thought it said 'heavy machinery', not 'homosexuality' - turns out I could have been driving those tractors all along.

On Hollywood's Obsession With Weight

Often criticized for her appearance, Fisher spoke to Good Housekeeping about Hollywood's obsession with weight this month. "We treat beauty like an accomplishment, and that is insane," she said. "Everyone in LA says, "Oh you look good," and you listen for them to say you've lost weight. It's never, "How are you?" or, "You seem happy!"

On Finding "The One"

She told the Chicago Tribune in 2008 that her engagement to Dan Aykroyd was over a Brussels sprout.

I was engaged to Danny Aykroyd. On Blues Brothers, he proposed in the trailer on set. He was forcing me to eat because I was very thin in those days — no longer — and I inhaled a Brussels sprout, and I started choking. He thought I was laughing, and then he saw that I was dying, and he did the Heimlich maneuver, and then like 10 minutes later he asked me to marry him, and I thought, "I better marry him. What if that happens again?" We had rings, we got blood tests, the whole shot. But then I got back together with Paul Simon.

Princess Leia might be the ruler of the galaxy, but Carrie Fisher is the blunt badass of Hollywood. And that might be the title she prefers.